A Moment of Slime 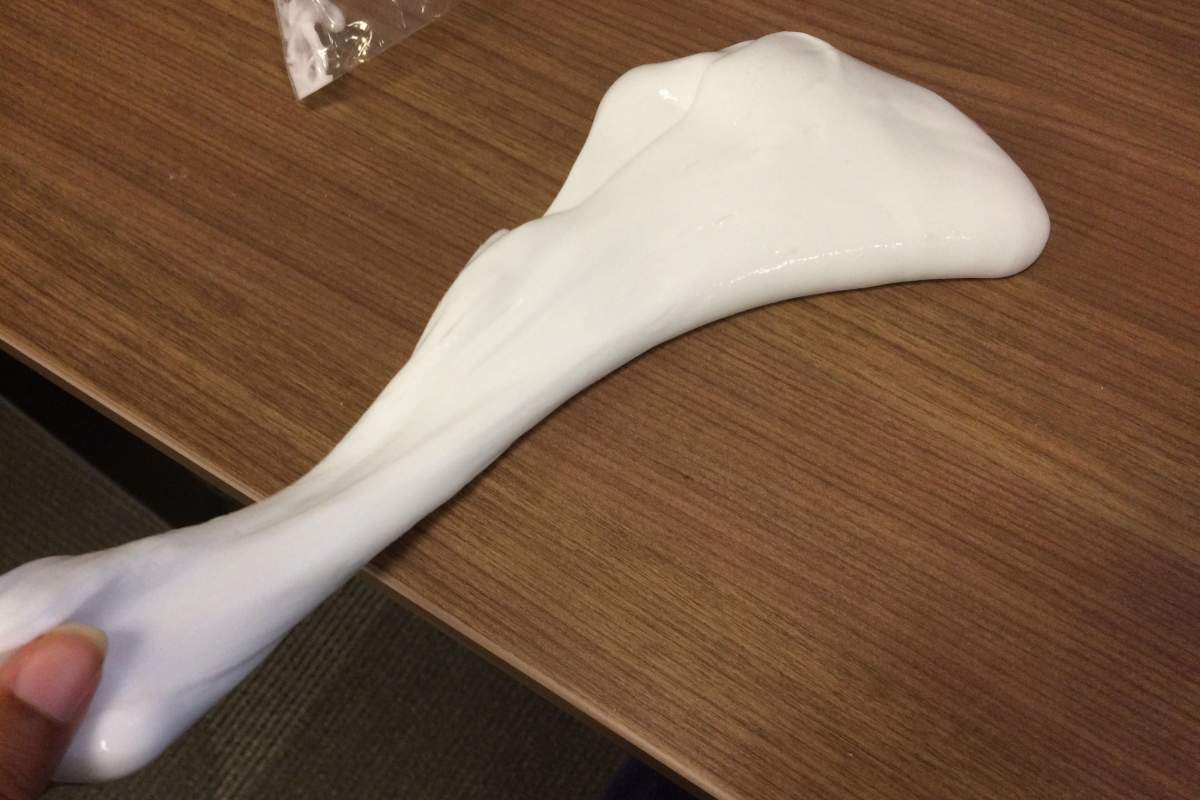 So, you want to make a non-Newtonian fluid, even though you aren't a slug. And you understand that even though your body naturally produces mucus, it's considered socially unacceptable to play with that. Then, it's time to make slime.

If you're too impatient to read the science and just want to make slime, here's a link to a separate post with the recipe.

Think, for a moment about water. Water between 32 and 212 (if you use Celsius, yup, 0-100) degrees is a liquid. It takes the shapes of the thing containing it.

Water does change into other forms of matter; it becomes a solid, ice, when it gets below 32 degrees, and becomes a gas above the 212 degrees boiling point. Sir Isaac Newton's theories about matter account for the behavior of liquids like water, and how temperature affects their states.

(As almost always with these blog posts, if you're interested in learning more about these things in further detail, the sources below are great resources to use.)

There are some things, like slime or honey or, a thing I just learned about while writing this called, Oobleck that don't follow the rules he set up. That's why they're referred to as non-Newtonian fluids.

A non-newtonian fluid is one where its viscosity changes, not just due to temperature, but based on the force applied to it. A well-made slime can be pressed very thin, it can pushed and pulled into a blob.

The recipe we used to make slime consisted of a teaspoon of Borax, a whole container of 3.4 oz Elmer's school glue, and water. A slime recipe like this (there are many other versions floating out there, but this one is super simple), relies upon the chemical reaction between the polyvinyl acetate in the glue, the water, and the borax.

One more before the recipe: If you're really uncomfortable with Borax, you can still make a non-Newtonian fluid by using the Oobleck recipe below.

Oobleck, is named after a substance in a Dr. Seuss book. It's a mixture of cornstarch (1 to 2 cups), water (1 cup), and if you want it to be fancy, food coloring (add it to the water, before mixing the cornstarch and water together). Oobleck, like slime, will move into different shapes based upon the pressure being placed upon it.

Slime regularly has boric acid or borax as one of its ingredients. Kids should, because borax when it's ingested or has direct, sustained eye contact, can be harmful to someone's health, be supervised when they're making slime. And while Oobleck is drier and (in this writer's opinion a little less fun to play with), it's a pretty good alternative for anyone uncomfortable with kid using a chemical like borax.

1 teaspoon of Borax, a 4 oz container of Elmer's school glue, one cup of warm water.

You'll also need a wide bowl and a spoon.

You can also add food coloring dye and glitter (and even buy special kits online that will help you make glow in the dark slime.). Some people online said the dyed slime can leave stains on hands and clothes. If that happens to you, vinegar can help with the stain removal.

For storage, you can use a sandwich bag that completely closes.

Start by adding one teaspoon of Borax to your one cup of water. Make sure the borax dissolves into the water. I had to stir mine a little bit.

In your bowl, pour the entire container of school glue. If you're going to use dye, add it now to the glue. I purposefully left off the amount of dye because it's really based on how light or dark you want your slime to be. Stir in your drops of food coloring into the clue, until you've found a color you like.

Keep stirring. Touch the mixture to see its texture and how things are turning out. You want to be patient here. The first time I made this, I got impatient, poured in the entire cup of water plus the undissolved Borax at the bottom, stirred it quickly, and made a substance closer to Silly Putty than slime.

When the slime is a texture you like, take it out of the bowl. Press on it, pull, roll it out. Doing this will let you (or the child you're helping do this experiment) see how a non-Newtonian fluid does change its shape based upon the amount of pressure you apply to it.

There are many other slime recipes out there using different materials. Shaving cream added in can make the slime fluffy. Instead of using Borax, you can use baking soda and contact lens solution (in the united states, most contact lens solutions have boric acid in them).