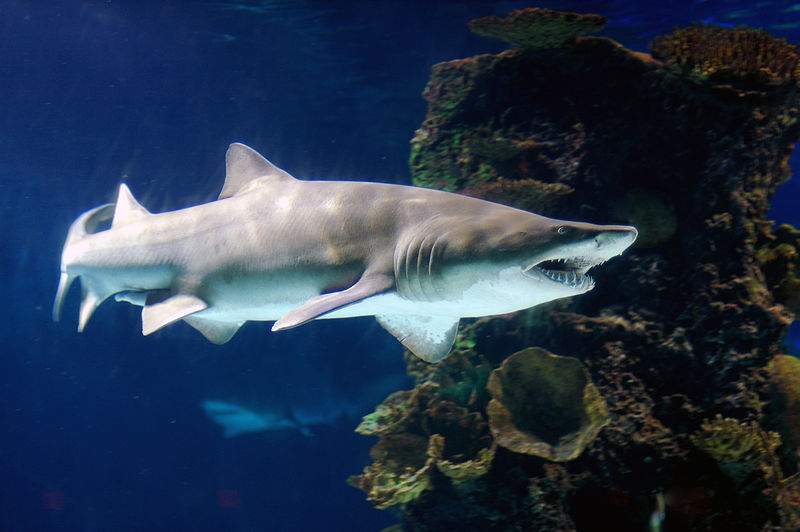 The sand tiger shark gets an early start on sibling rivalry. While still in the womb, the shark embryos compete for survival.

Female sand tiger sharks produce hundreds of eggs, and then mate with multiple males. Several eggs get fertilized, and each embryo settles in one of the motherâ€˜s two uteri.

This is when the "extreme" sibling rivalry starts. When a growing embryo is about two inches long, it "hatches" from its egg capsule. Sand tiger shark gestation is really a "race to the hatch," because the first embryo to hatch turns on its siblings, cannibal style. It attacks, kills, and consumes them all. This is known as "embryonic cannibalism."

With its brothers and sisters out of the way, the hatchling can feast for the rest of the pregnancy on unfertilized eggs floating around in the uterus. The same process of sibling cannibalism happens in both of the motherâ€˜s two uteri.

The mother eventually gives birth to two offspring. Theyâ€˜re about three feet long, and well prepared for survival thanks to their in-utero predatory rivalry.

Marine biologists at Stony Brook University have done research that suggests embryonic cannibalism is an evolutionary adaptation. Since female sharks mate with multiple males, the embryo that survives has effectively eliminated the offspring of all other male partners.

However, it is still unclear precisely why one mate's offspring survives over another's. One possibility is that the surviving embryos simply gestate more rapidly than others.