To Seek Out Strange New Worlds: The Kepler Space Telescope 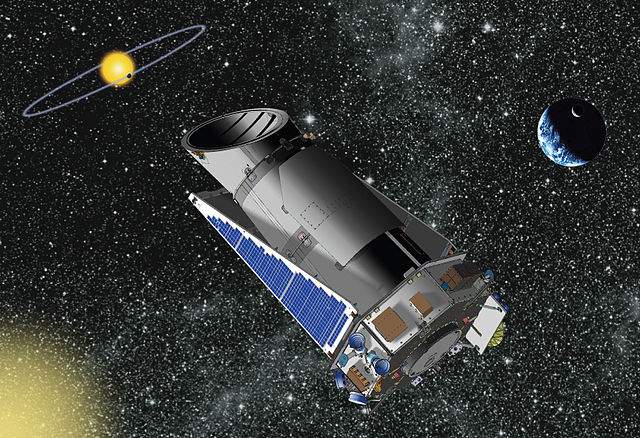 The Fantasy Of Other Worlds

The belief that other stars have planets has been pervasive in popular culture and science fiction for decades. Yet even as Hollywood made Star Trek and Star Wars, science lacked certain evidence that such planets existed.

It wasn't until the 1990's that the daunting technical problems of detecting extra-solar planets (or exoplanets) were finally solved. The first such worlds found were nothing like Earth, however, but instead were giants like Jupiter orbiting very close to small stars.

Astronomers would need a telescope in space to detect smaller Earth-like exoplanets. To answer this need, NASA developed the Kepler Space Telescope, named for the seventeenth century astronomer Johannes Kepler.

The Search For Other Worlds

Launched in 2009, Kepler is a reflector telescope with a 55-inch main mirror, which is a little more than half as big as that of the Hubble Space Telescope.

With current technology, exoplanets are too faint to detect directly. Instead Kepler senses the tiny dip in the brightness of starlight produced when a planet passes in front of its star.

At the focus of its mirror, Kepler has a highly-sensitive, 95-megapixel array of light sensors that is able to simultaneously monitor 145,000 stars for telltale brightness dips.

To continuously monitor its stars, Kepler must point fixedly in one direction. It is precisely stabilized by four gyroscopic flywheels.

So that Earthâ€˜s gravity and other influences don't interfere with the scope's fixed stare, Kepler floats in deep space, where it orbits the sun in a path trailing Earth.

A Bounty Of Other Worlds

As of the beginning of 2013, Kepler has identified a total of 2740 exoplanet candidates. 351 are similar in size to Earth, and 816 are so-called "super-Earth" planets between 1.25 and 2 times the diameter of our home planet.

To be habitable, a planet must orbit its star at the right distance so that it is neither to hot nor too cold for liquid water to exist on its surface. This distance range is called the "habitable zone."

The Quest For Another Earth

Based on Kepler data, astronomer Francois Fressin of the Harvard-Smithsonian Center for Astrophysics estimates that at least 17 percent of broadly sun-like stars have Earth-sized planets orbiting closer to their star than the planet Mercury does to our sun. The frequency of Earth-like planets at larger distances from their stars is not yet known.

Another study indicates that Earth-sized planets may be even more common around red dwarf stars, alone implying more than 100 billion such planets in our galaxy. Although dim and diminutive, red dwarfs do possess a habitable zone and are theoretically capable of supporting habitable worlds.

In May, the second of Keplerâ€˜s four vital gyroscopic stabilizers failed. Kepler needs three to function, so unless one can be revived, the mission can't continue.

But whatever Keplerâ€˜s future, its legacy is impressive. In the twentieth century, a galaxy full of Earth-like worlds was our fantasy; in the twenty-first century, itâ€˜s become our reality.