How Rainbow Weevils Get Their Rainbow Spots 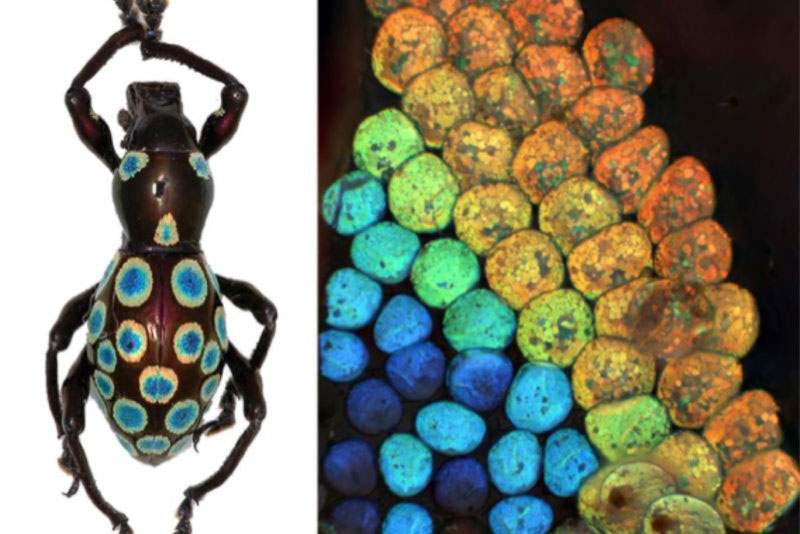 I wouldnâ€˜t usually call an insect beautiful, but this one, Pachyrrhynchus congestus pavonius,Â does have really pretty spots. Look at all those colorful rings--itâ€˜s like a rainbow.

It's why these insects are called rainbow weevils. A lot of insects can produce one or two colors, but the rainbow weevil has spots with a whole spectrum: concentric rings starting in the center with blue, then cyan, green, yellow, orange, and finally red on the outside.

Which got scientists wondering how the rainbow weevils managed it. They examined their scales using high-energy x-rays and a scanning electron microscope to get a detailed picture, and found that each scale was made up of 3-D crystalline structures made of chitin, the main ingredient in insectsâ€˜ exoskeletons.

Most insects have chitin structures that are all the same size, and the color we see depends on how the structures are angled--different angles reflect different wavelengths of light. Since the rainbow weevilâ€˜s colors donâ€˜t depend on angle, researchers think that studying them can help us create cosmetics or displays on phones that look the same from any angle, without any color distortion.

If you want to read about recent discoveries in color, we recently featured structural color and scientists researching it to use to innovate in different fields.