Monkeys That Chew Their Cud 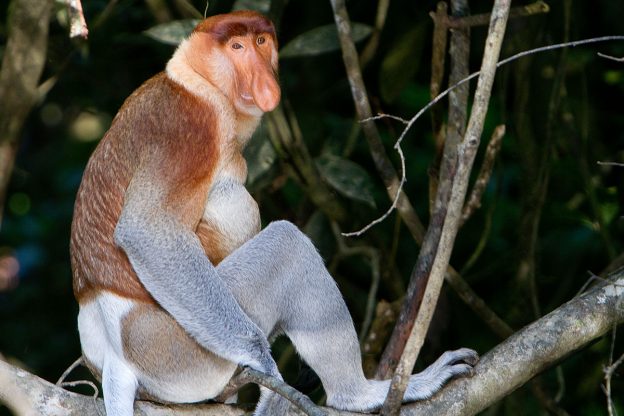 Proboscis monkeys from Borneo and cows have something in common: they both chew their cuds.

Proboscis monkeys are reddish-brown, long tailed primates known for their large noses. Babies are born with normal sized noses, but by the time they're adults, males can sport noses up to seven inches long. It's their leafy diets that have led to the evolution of a digestive tract very similar to cows.

Cows and other ruminants have multi-chambered stomachs adapted for breaking down foods that are high in cellulose, a plant fiber that resists digestion. Cows use colonies of bacteria in one chamber of their stomach to cut apart the cellulose.

They also chew their cud, which means they regurgitate their food from their stomach and re-chew it to make the pieces smaller. This helps break the food into smaller and smaller pieces so that bacteria can digest as much as possible.

Like cows, proboscis monkeys eat a vegetable diet that's high in cellulose. They have a large belly which accounts for a quarter of their body weight. Their digestive system is divided into compartments similar to the cow.

They also have colonies of bacteria in their gut to help digest plant material and neutralize leaf toxins. So, it's not surprising that proboscis monkeys chew their cud just like cows.