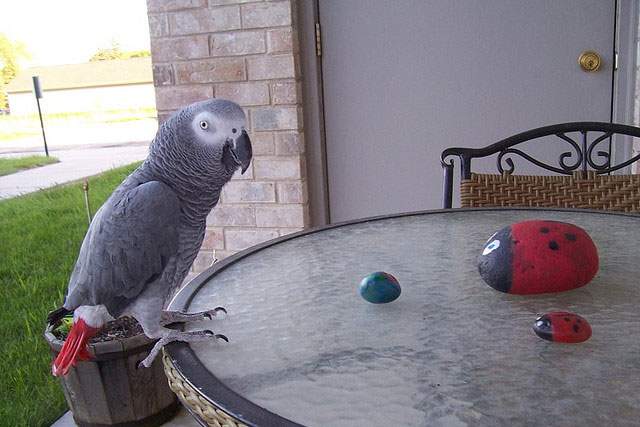 Did you know that gray parrots have learned to distinguish objects and colors?

You're thinking of Irene Pepperberg's parrot, Alex. Before his untimely death, he could identify colors, materials and shapes, knew the meaning of over one hundred words and understood the concept of "zero."

At the time, there was debate over whether or not Alex was intelligent or mimicking researchers. Scientists always assumed that birds were...well, "bird brained." It started a big discussion about bird intelligence.

These new tests were about reasoning ability?

Yes. They were testing for what's called "inference by exclusion." That's the ability to make a correct choice by logically excluding alternatives. Austrian researchers first determined that the birds had no preference for seeds versus walnuts.

Then they let each parrot watch as they hid a seed under one opaque cup and a walnut under the other. Keeping the cups in the same position, they hid them behind a screen, removed one of the treats and showed it to the parrot. The screen was removed, and they watched to see if the parrot knew which cup held the remaining treat.

Some art smarter than others...

Like with chimps, some parrots are smarter than others. One female was able to choose the right cup three quarters of the time. Chance would result in fifty-percent success.

That put her on par with chimps and four-year-old humans. The others chose randomly, but if the test was done without the screen, they figured out what was going on.