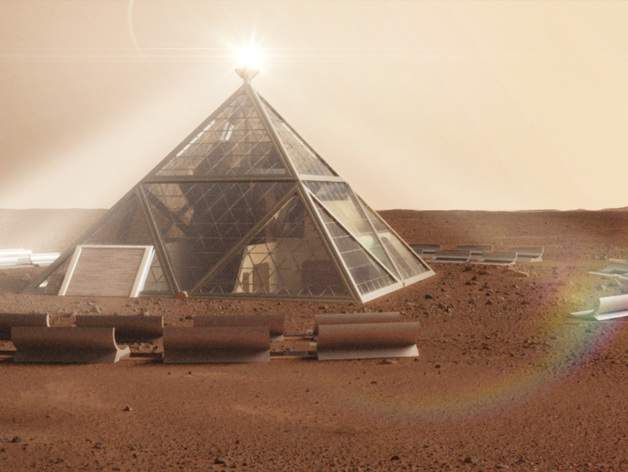 Forget seeing aliens in the movies or somewhere in Middle-of-desert, New Mexico, have you ever wanted toÂ beÂ a Martian? The Dutch non-profit Mars One hopes to send astronauts on a one-way mission to the red planet before 2025. More than 200,000 Earth-people applied to make the journey.

"We want to go elsewhere, build new worlds, and reach out into the cosmos. Weâ€˜ve been exploring Mars as a science project for forty years now. Itâ€˜s time we move on to the next phase, settlement of the solar system," explained Mason Peck, a Mars One adviser who used to be a NASA Chief Technologist.

Mars One has reduced the applicant pool to about 700, and eventually 24-40 will be chosen to work and travel in teams of four. Preparations for the journey are underway.

What They'll Live In

Although conditions on Mars are more suitable for humans than many other planets, the settlers will have to cope with hostile conditions: high levels of radiation, extreme temperatures and rough wind storms. So designing a home for the future astronauts presents an interesting challenge.

Winners were recently chosen from more than 200 entries submitted to a NASA and Makerbot competition for structures that could sustain life on Mars. The Queen B, a structure made of hexagons 16 feet in diameter, won first place. The Mars Pyramid (pictured above) and the Mars Acropolis, featuring greenhouses for food and oxygen production, won second and third.

After the seven-month trip, settlers will have to wear Marssuits to protect them from the new atmosphere. Two satellites on Mars will enable communication to stations on Earth. The astronauts will rely on solar panels for energy needs. Melting ice in the ground soil can provide water, and its evaporation will yield oxygen. Nitrogen, a large part of what we breathe on Earth, can be taken from Mars' atmosphere.

Want to Join In?

It's too late to apply to live on Mars, but Mars One is accepting proposals from university teams for experiments to take place on the Unmanned Mars Mission in 2018.