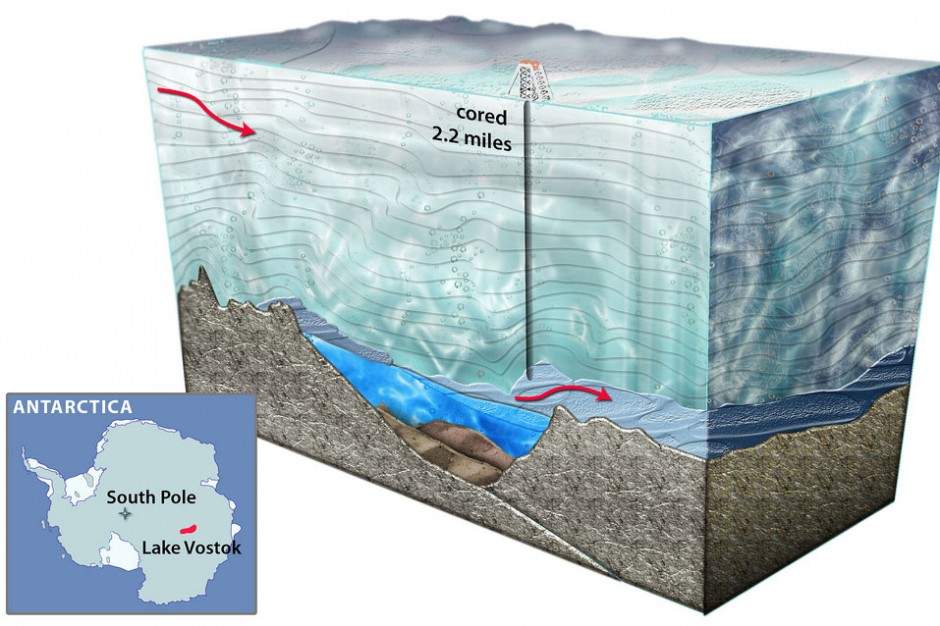 Lake Vostok is one of Antarctica's many freshwater lakes. Despite being located in the area that registered the coldest temperature on Earth, it is not frozen.

How Can This Be?

Lake Vostok is buried beneath two and a half miles of ice. Because of the tremendous pressure, over three times that of the normal atmosphere, the lake's water remains liquid at about twenty seven degrees.

Because Lake Vostok has been covered with ice for over twenty million years, scientists believe it may be the most pristine lake on the planet as well as the most intriguing.

Where Is Lake Vostok?

Lake Vostok is about the same area as Lake Ontario, but with three times the volume. It is devoid of light, always cold, and supersaturated with gasses such as oxygen. In essence, the lake is like an alien world. Some scientists compare it to Jupiter's moon Europa. It is a world that has remained untouched, until recently.

Russian scientists, who have been drilling for over a decade, finally reached the lake in February, 2012. They've already found bacteria, marine diatoms, pollen and other unknown organisms in the ice near the lake's surface. The question now, is: What will they find in the lake itself?

What Have Scientists Discovered?

Any organisms that survive will have to do so without light, under high pressure, and in cold conditions. Is that possible?

Scientists have discovered extremophilesorganisms that can survive in conditions of extreme heat, cold, radiation, and pressurein many inhospitable places across the globe. They expect that Lake Vostok will have its own collection of organisms adapted to the lake's conditions.

As research continues, Lake Vostok is likely to have many surprises in store for us.