Inside The Heads Of Neanderthals 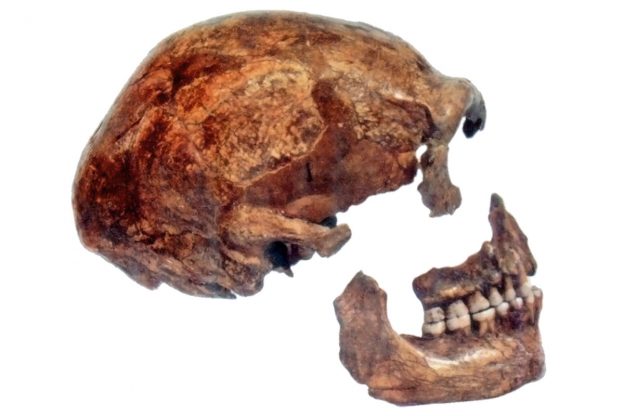 This Neanderthal skull was found in a cave in Belgium, a site that has yielded a number of insights about Neanderthal behavior. (We El, Wikimedia Commons)

n contrast to common sense notions of Neanderthals as dumb apes, living without culture in the distant past, recent research makes this human ancestor seem more complex than previously thought.

Scientists extracted traces of poplar from one El Sidron individualâ€˜s teeth. This Neanderthal might have been treating a toothache with herbal medicine; according to the authors of the study, published in the April 2017 issue ofÂ Nature, poplar "contains the natural pain-killer salicylic acid (the active ingredient in aspirin)."

The different Neanderthal groups also had very different diets. At the cave in Spain, where the Neanderthal herbalist was found, no signs of meat eating were discovered. Instead, it looks like the Neanderthals there ate mostly mushrooms, forest moss and pine nuts.

In Belgium, however, the primary diet consisted of wooly rhinos and sheep. This suggests that Neanderthals did not simply follow one behavioral pattern, but adapted their behavior to local conditions.

All of these discoveries have led some linguists to wonder whether Neanderthals also used language.

Searching For The Origins Of Language

One model in linguistics describes two conceptions of language in order to avoid confusion and ambiguity.

FLN is only used to refer to the abstract, computational aspects of human language.

Some linguists have argued that the capacities that FLB comprises may be shared with some of humanityâ€˜s ancestors, Neanderthals in particular. They recognize, however, that Neanderthals might not have possessed all of the aspects of FLN. According to this hypothesis, if Neanderthals had FLB, it would demonstrate a possible evolutionary history of language, in which FLB was a precursor to the uniquely human and more complex FLN. 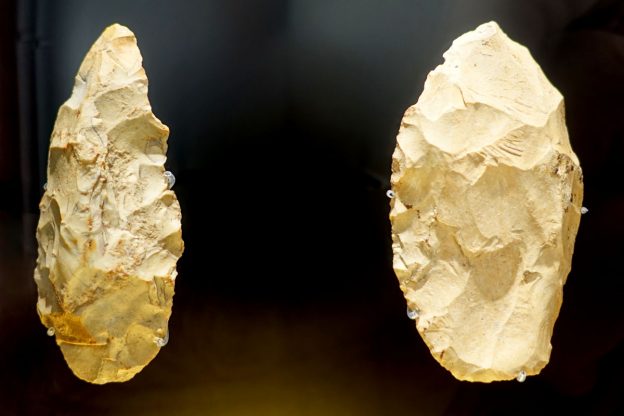 Some linguists see tools like these as evidence that Neanderthals had language. (Public domain)

Since language is not physical, and therefore canâ€˜t be found inside a Neanderthal grave, researchers looking for evidence of language would need to find stand-ins, likeÂ all of the recent discoveries made about Neanderthals discussed above. The use of tools, the ability to adapt their diet to different environments and genetic evidence pointing to interbreeding with humans suggest that Neanderthals possessed advanced cognitive abilities and were physically similar to humans.

However, many linguists and paleontologists strongly contest the theory that Neanderthals possessed anything comparable to human language.

They point out that the cognitive skills necessary for language are quite different from those required to make tools. They also caution against drawing too many conclusions from the shared genetics of humans and Neanderthals.

Those that argue in favor of Neanderthal language point to DNA evidence showing that Neanderthals possessed the gene FOXP2, a gene associated with human language. But our understanding of FOXP2 is still limited. It may be connected to the ability to physically make sounds, but not language.

According to some biologists, there are likely many other genes that are also responsible for the human language faculty.

Since there is no smoking gun that can definitively say whether Neanderthals had language or not, no consensus exists either among linguists or paleontologists. Multiple interpretations of the data are possible, so the debate will likely continue.