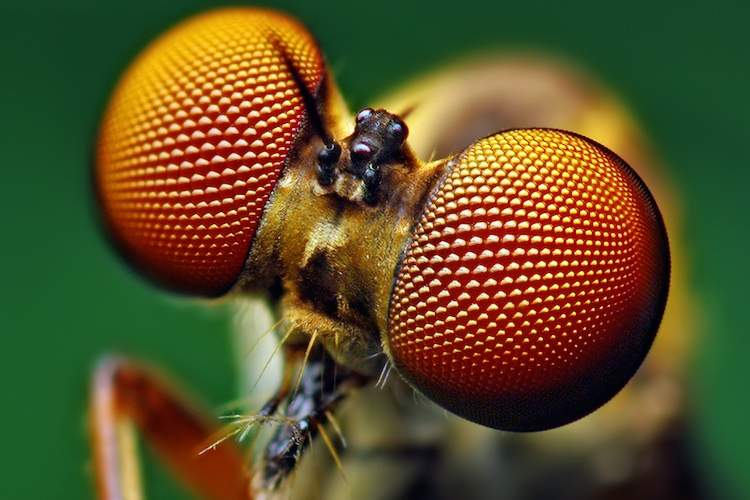 Insect eyes are very different from ours. Our eyes are similar to a camera. There is a pupil at the front that admits light, and the cornea and lens bend light to form an image. The image falls on the retina, a sheet of light-sensing cells at the back of the eye.

The insect eye, on the other hand, is a compound eye, consisting of thousands of tiny hexagonal tubes called ommatidia. Each has its own lens at the front and its own cluster of light sensing cells at the back. The tubes form an interlocking carpet that wraps around the insect's head. The image formed is a mosaic, and each tube contributes one piece.

Insect eyes are different from ours because, about 600 million years ago, the ancestors of insects and crustaceans evolved vision separately from the ancestors of humans and other animals with backbones. Each found a different, but successful solution to the problem of how to form an image, and passed on that solution to its descendants.

The image they form is not as clear and detailed as a camera eye, but compound eyes do have a much wider field of view, which is useful in flight. Wrap around vision helps aerial hunters like dragonflies spot their prey.

Many insects can see ultraviolet light, which we can't. Flowers have ultraviolet markings, that are visible to pollinating insects, but not to us. Every kind of eye serves the needs of its user.