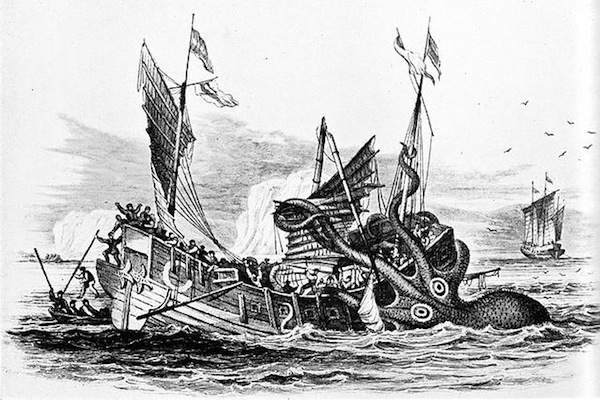 The world's oceans are a real death trap.

Think about it: If rip tides, rogue waves and perfect storms don't finish you off, there's always sharks, lethal jellies and sea snakes batting cleanup. Landlubbers just don't stand a chance splashing around out there.

Still feeling cocky? Head over to the National Oceanic and Atmospheric Association (NOAA) website and browse their gallery of unexplained underwater sounds (see link below).Â If these don't give you second thoughts about wading out, maybe natural selection intends to make an example of you.

As paranoia mounted over the threat of Soviet submarine attacks during the first decades of the Cold War, the U.S. Navy installed an extensive array of hydrophones (underwater microphones) to keep tabs on enemy movements.

Since the fall of the Berlin wall in 1989, however, NOAA has been granted joint access to the array in order to gather information for scientific purposes. Much has been learned about whale song, anthropogenic noise pollution and oceanic seismology as a result.

But some of the stuff these hydrophones have picked up over the years is just plain freaky.

One signal, nicknamed â€˜Slowdown', sounds like an extraterrestrial landing. â€˜Julia' is even scarier, calling to mind some tortured, tenor-voiced ghoul crying for help from untold depths.

By far the most famous anomaly is the so-called â€˜Bloop'. When sped up so as to be audible to human ears, it's kind of a whoosh followed by a sharp thud. It was heard repeatedly during the summer of 1997.

According to marine biologists, the sound's profile bears a striking resemblance to those of other noise-making marine species. The only difference is that this is several times louder than the loudest known sea creature the blue whale.

Though the scientific community generally remains agnostic over the Bloop's origins, I'm going to go ahead and say that a frigate-gobbling kraken is our best-case scenario. And that's not so good.