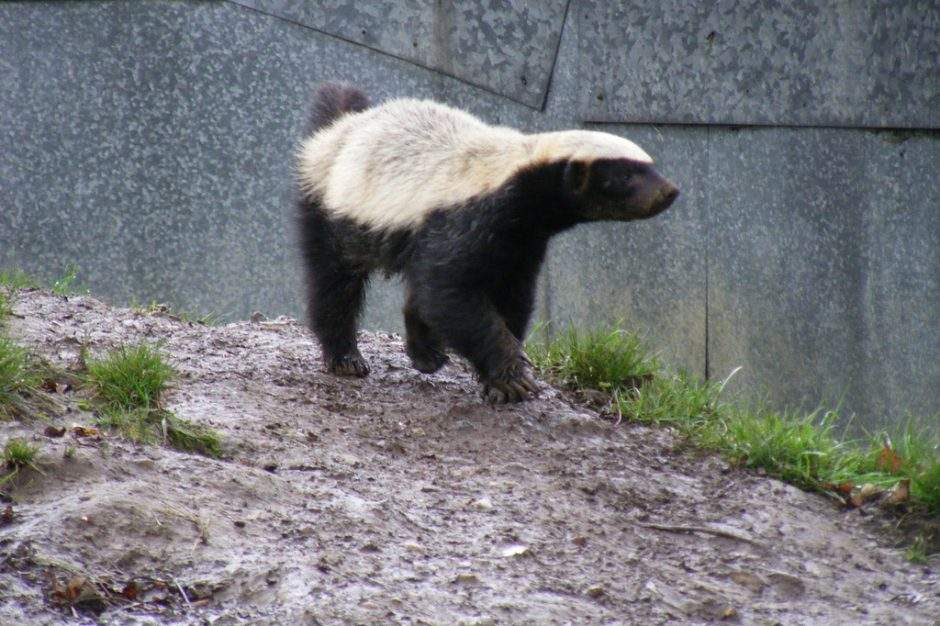 A ratel aka honey badger in captivity. (Marie Hale, Flickr)

You‘re walking around the zoo and see a sign for the honey badger. Sounds like a sweet little guy, right? Not exactly. These mammals, known as Mellivora capensis, or "ratels," are some of the fiercest animals on Earth.

Honey badgers are about the size of a large house cat and native to India, the Middle East, and much of Africa. Stout creatures with coarse black fur and short legs, they‘re actually members of the weasel family.

They get their name from their love of honey, but they‘re omnivorous and will happily eat almost anything. Roots, insects, fruit, small mammals, snakes, carrion--essentially, whatever they can get their claws on. Speaking of which, watch out: those long, sharp claws are great for snaring prey, digging burrows, and doing serious damage when they lash out in an attack.

And a honey badger will lash out if it feels trapped. Its first line of defense is usually to use a gland at the base of its tail that releases a foul-smelling liquid, much like a skunk. If that doesn‘t work, the honey badger will viciously attack whatever it‘s facing--cobras, humans, even lions.

And it‘s well equipped to do so. A honey badger‘s hide is so thick that it‘s unaffected by porcupine quills, bee stings, and some animal bites, and it can withstand getting bitten by a venomous snake just by sleeping it off. Its jaws are strong enough to crack tortoise shells, and its skin is so loose that, when bitten by another animal, it can twist around and bite back.

So, enjoy seeing these powerful creatures at the zoo--but perhaps don‘t try to pet one.

Thank you to Sharon Jansa of Northwestern University for reviewing this episode‘s script.