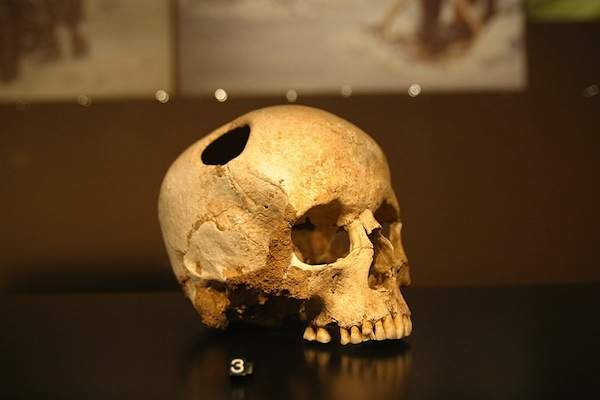 In keeping with our recent morbid fascination with bad stuff that can happen to good brains (see â€˜Dr. Harvey's Illicit Souvenir' and â€˜When Good Proteins Go Bad'), we now shift our attention to the grisly practice of trepanation.

As it turns out, for one reason or another, people have been drilling holes in each other's heads for thousands of years.

From Modern Medicine To Prehistory

Just so the notion doesn't seem completely insane, let's look first at trepanation within the context of contemporary medicine.

Today, doctors routinely perform operations called â€˜craniotomies' and â€˜craniectomies', during which a section of skull is removed, exposing tissues surrounding the brain.

This is carried out for a variety of reasons: to relieve swelling caused by head trauma, to implant deep brain stimulators and to alleviate the symptoms of Parkinson's disease.

Turning back the clock, we see human cultures the world over utilizing different forms of this technique to treat a wide variety of ailments from skull fractures and seizures to migraines and mental disorders.

So far, the oldest trepanned skulls have been found in France and date back to 6500 BCE.Â Flint and obsidian implements were likely used to bore through the bone back then a far cry from the diamond encrusted instruments used in modern hospitals.

Within the last 50 years a small handful of individuals Peter Halverson and Bart Hughes being two of the most famous became convinced that trepanation was a sure-fire means of attaining â€˜higher states of consciousness'.

In 1965, Hughes performed the operation on himself with a Black and Decker drill. Others have followed suit.

Please don't be one of them.