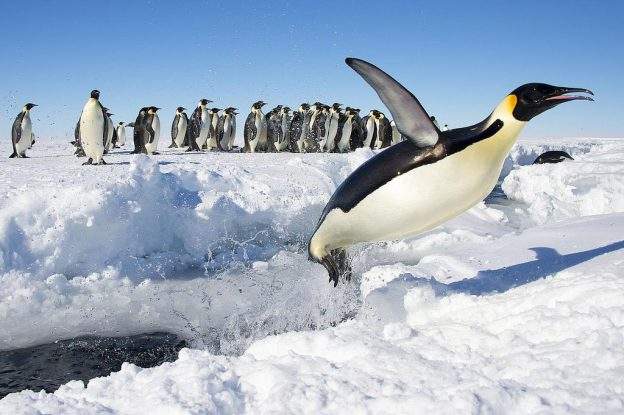 According to natural selection, species evolve in ways that better enable them to survive and pass on their genes.  But sometimes evolution takes what may appear to be odd and unexpected turns.  Take, for example, birds that have wings but can't fly.  What can explain this strange phenomenon?

First, it's possible for traits to hang on in truncated form even after they've become irrelevant.  For example, many doctors believe that the appendix is a remnant from an earlier stage in human evolution.

A similar explanation may account for certain flightless birds.  Take the ostrich.  Way back down the evolutionary line ostrich ancestors may have been able to fly.  But as time passed and ostriches began to outgrow their predators, flight may have become less and less necessary.  So, instead of their wings growing larger and more powerful to enable ostriches to lift their bulk into the air, the opposite happened.  Because ostriches grew large enough to fend off their predators and became fast enough to run away from danger, their wings just sort of stuck around as reminders of their airborn past.

In other cases, wings evolved to serve alternate purposes.  For instance, penguins evolved from flying birds.  But once penguin ancestors settled in the Antarctic region, flight became unnecessary for at least two reasons.

First, because there were no land-based predators.  And second, most available food was underwater.  But unlike ostriches, whose wings became relatively useless, penguin wings evolved in advantageous ways.  They became short, paddle-like appendages that helped penguins evolve into exceptional swimmers.