Why Your Gravy Needs Starch 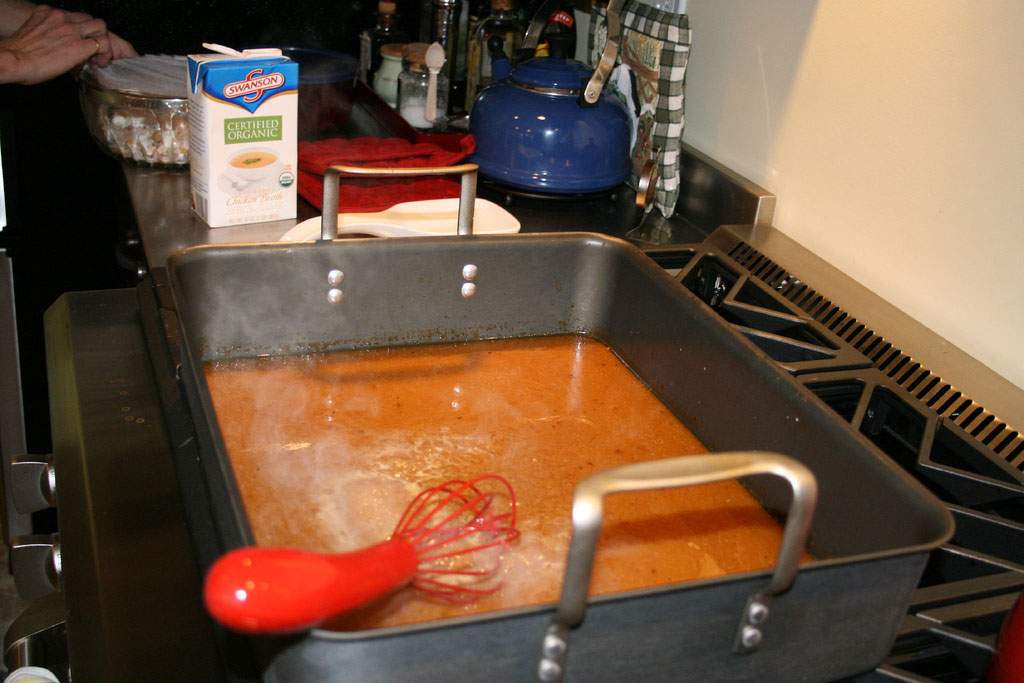 It's not a new or especially novel idea that cooking is a science. But it does seem like people forget how many disciplines it touches, from physics, chemistry, biology, ecology, botany, among others. Cooking and eating may be the most enjoyable science people experience on a regular basis. Last week, we talked about the science of delicious, smelly vinegar. This week starch and how you need it to make gravy.

The base of every good gravy is a roux. Â A roux, for people who aren't super into cooking or from New Orleans, is a combination of a starch, often flour, and a fat, often butter.

It's an important skill for people who love sauce or aspiring cooks to master, because in French cuisine, there are five mother sauces: bÃ©chamel, tomato, veloutÃ©, hollandaise, and espagnole. A roux is the base for four out of the five of these sauces.

It's also a good skill to learn because it's another way to understand the chemistry of starch and butter.

Starch is (via Starch Europe): "Once extracted from a plant, pure starch (native starch) is a white tasteless and odourless powder that is insoluble in cold water or alcohol, which is used widely in the food and paper industry primarily for binding and thickening purposes." It's a complex carbohydrate i.e. it's a chain of sugar.

Sugar, when it's simple on a molecular basis, dissolves in water. But starches don't dissolve. If you read our post about making slime a few weeks ago, you might remember that we referenced the slime alternative, Oobleck.

Oobleck is made from mixing cornstarch and water, and is a non-newtonian fluid. It's a science experiment that can teach people about viscosity. It's also a good way to show when something that is almost entirely starch mixes with water, it can quickly become too close to a solid.

You start a gravy by adding your fat (butter, pan drippings, etc.) to flour in a pot on a hot surface. When you do this, you're creating an emulsion. There are naturally occurring emulsions, when we talk about butter and milk in the future, this will come up again, but there are also emulsions that are created in the act of cooking.

There's a clichÃ©d phrase people like to use: oil and water don't mix. But they actually do under the right circumstances. So, for example, oil and water can mix if you add a starch like flour and use the right amount of heat and stirring.

The Gelatinization Of Starch

The heat is important because starch needs it to gelatinize. This is a basic way to explain it (and if you're interested in the more in-depth explanation, check out the links below), but the starch molecules in flour need to heat up to absorb more water.

If it's not heated up to a proper temperature, it's how you get lumpy gravy. The starch molecules in the flour don't swell enough to combine with the water in the fat. If you turn up the heat too high, the flour and butter can burn, giving your gravy an acrid, not tasty base.

But at the right heat, with whisking--the motion also helps to break down the starch molecules, making them more soluble which is what the heat is also doing--the starch gelatinizes, or bonds, the flour and butter together in a smooth mixture.

The next time you make gravy, consider the chemistry behind it. Knowing what the starch and butter are doing on a molecular level, even in a basic way like this, might help you make a better sauce.