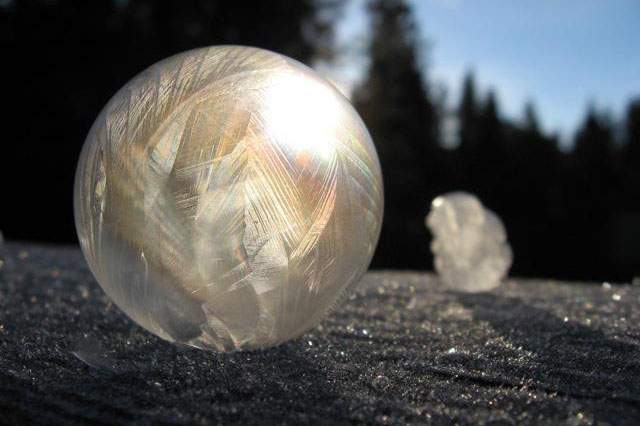 If you're like us at A Moment of Science headquarters, you're enduring some very cold temperatures. And while the cold and snow, especially in Indiana, are necessary, being in it is kind of miserable.

So, here's an activity with a little science to make the freezing cold a little more fun, and maybe even a little more beautiful: Frozen Soap Bubbles.

Karo Syrup has a recipe up on their website (note, this post is not sponsored at all by them, their recipe is just the one we read with the most widely-accessible ingredients and seemed the most cost-effective. Some recipes ask you to buy glycerin or other sugar-based thickening agents that are much more expensive):

You'll also need a shallow container for this mixture, as well as a ring or wand taken from a conventional bubble-blowing liquid. (And of course, the appropriate clothing for going outside in very cold temperatures)

And the recipe above is for a general recipe for making bigger bubbles. We've talked about this in other moments of science, but creating bubbles is all about surface tenison.

On a basic level, when you're creating a bubble, you're also interacting with the surface tension of the liquid. So, when it's just water, it's much harder to create a bubble because the water molecules are attracted to other water molecules. Adding soap and corn syrup to the mix weakens the surface tension and makes it much easier to form bubbles.

During the freezing process, you'll be able to see that there are layers in the bubbles. You can also view this in the videos linked below.

In general, the online consensus for this is that the highest temperature where the works is approximately 15 degrees Fahrenheit (-9 degrees Celsius). Some people have said they've made this happen at 32 degrees, you'll see other sources say this can only happen when it's "colder than -13 degrees. We're going by the consensus and the accompanying footage that shows people doing this around 15 degrees Fahrenheit.

What we think the missing link is this: 15 degrees and above, it's possible to freeze the bubbles directly on the instrument you're using to create them. If they don't move around a lot, there's stability there to freeze them.

When you start getting to the much colder temperatures is when it's possible with a lot of patience to make bubbles capable of freezing in the air. Of course, shortly after they freeze, they start to break.

Turning This From Activity To An Experiment

If you wanted to turn this into an experiment and not an activity for your kids, you could attempt to do this at different temperatures and record the different ways the bubbles freeze or do not freeze.

You could also add in a different recipe: liquid soap on its own without water or corn syrup and see how that reacts in the different environments. Questions for them to consider: which formula produces better bubbles? At which temperature do bubbles start freezing in mid-air? Do the sizes of the bubbles differ between the different solutions you're using to make bubbles?

If you do this and you end up with great photos or videos, please tweet them at us! We can be found on Twitter as @momentofscience.