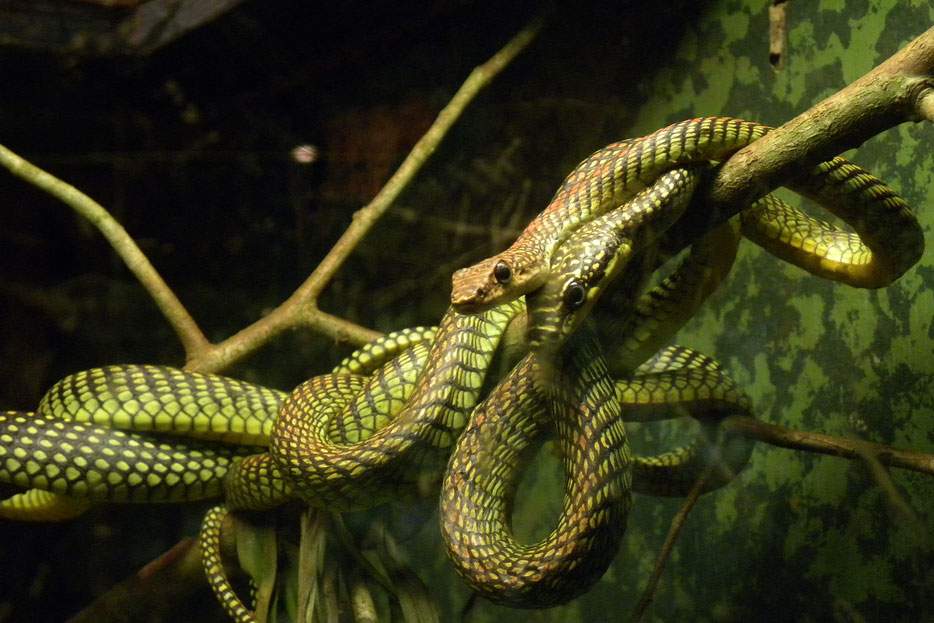 Given the hundreds of thousands of different animals inhabiting our planet, the list of those that can fly is quite small. There are birds, of course, and some insects, as well as bats, and creatures that can glide, such as flying squirrels and gliding lizards. Now, we must welcome another member to the airborne species list: flying snakes!

It's hard to think of an animal more earthbound than the snake, without even arms or legs to propel it a few inches off the ground. Yet zoologists have long studied so-called flying snakes that travel from tree to tree in pursuit of prey and in flight from predators. But for a long time scientists believed that these arboreal snakes did not so much glide as parachute, dropping from one tree to another.

One study showed that at least one species of flying snake does actually glide. Using videotape, scientists carefully observed paradise tree snakes as they hung from branches and then flung themselves through the air. By flattening their bodies and slithering mid-air, the snakes formed S-shaped wings that generated lift and allowed them to glide rather than simply fall. Using their heads to steer, the snakes were able to change direction mid-air and even avoid obstacles.

If you're afraid of snakes, and now suddenly anxious that the slithering creatures will start dropping out of the sky, don't worry; flying snakes are indigenous to Southeast Asia. And even if you one day find yourself hiking through the Burmese rain forest and a snake comes gliding your way, fear not. Flying snakes are classified as harmless.