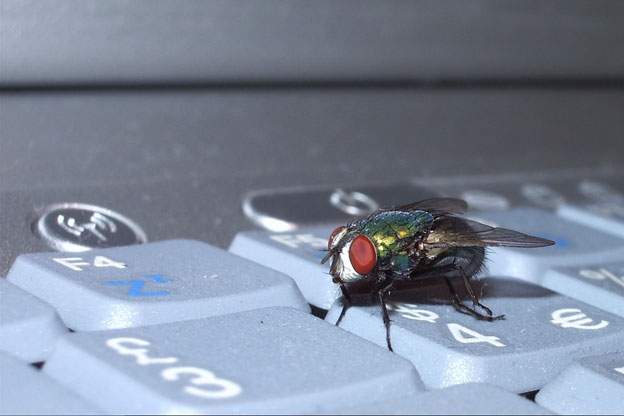 Computer bugs are problems or mistakes in a program that wreak all sorts of computing havoc, but hunting for computer bugs doesn't require a butterfly net or a can of Raid.

Why do we call computer bugs "bugs", anyway?

As the story goes, pioneer computer programmer Admiral Grace Murray Hopper coined the phrase in the early 1940s, when her computer crashed. Searching for the cause of the problem, Admiral Hopper discovered the original computer bug, inside her computer, stuck in a crucial relay, was a dead moth.

As she extracted the moth with tweezers, a colleague asked what she was doing. "I'm debugging the machine," she answered, and the stuff of computer legend was born. The dead moth was taped into a notebook that logged computer problems, and now it's preserved for posterity at the Virginia Naval Museum.

Over the course of her Navy career, Admiral Grace Murray Hopper became known as Amazing Grace not only for her technical genius, but also for her ability to persuade people to try something new. Among other accomplishments, Admiral Hopper co-invented the COBOL computer language. COBOL, or Common Business Oriented Language, was the first computer language to use words instead of numbers.

When Admiral Hopper first proposed a computer language using words, people said it wouldn't work because computers didn't understand English! However, she persisted, and COBOL revolutionized the computer industry by making computer language easier for programmers to understand. Amazing Grace helped make computers more user-friendly, easier to "de-bug," and accessible for use not just in military research labs, but in homes, schools, and businesses.