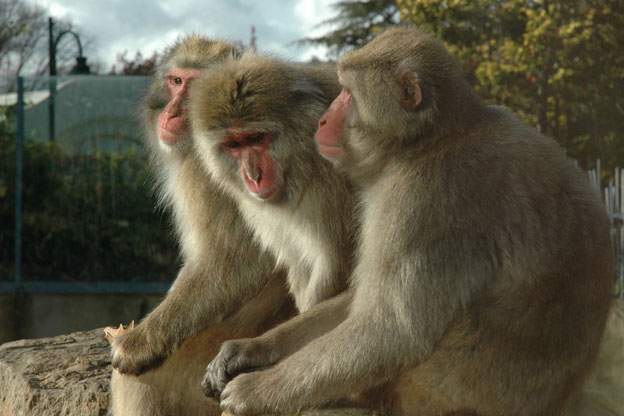 In 1953 on the island of Koshima, a primatologist was leaving sweet potatoes on the shore for the monkeys to eat. One smart monkey, a 1 1/2 year old named Imo, began washing the sand off her potatoes in a brook.

Next, Imo's playmates and siblings were observed washing potatoes. Then her mother and onward, throughout most of the group. In four years, three more of her relatives and four members of another macaque group were washing their food. The primatologist realized he was watching the way new ideas spread in society.

Infants in the next generation saw their mothers washing potatoes, and the majority of the next generation, both male and female, grew up washing their food, but not the older males. This is because in the Japanese Macaque society of Koshima, males older than four are at the periphery of the group. Female and juvenile macaques regularly eat together, while older male macaques rarely dine or interact with the larger group.

These innovations and their spread from Imo to the majority of the Koshima monkeys is called pre-culture. Pre-culture is used to make a point in the distinction between monkey (washing food, sitting in hot springs) and human (art, religion, music) culture. Despite this distinction, while Imo and all the monkeys who originated and propagated this behavior are dead, these innovations persist among the Koshima monkeys alive today.