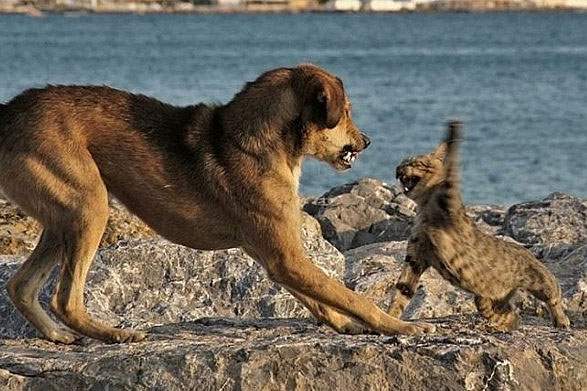 We do a lot for our pets, some of us even write scientific articles to laud their use of fluid dynamics.

A year ago, scientists from the Massachusetts Institute of Technology published a paper on the way that domestic cats lap up water. The conclusion? Cats are sophisticated drinking machines that use the physical force inertia to get liquids from a dish into their mouths.

Dogs just use brute force to scoop water into their mouths with their tongues. You can read the published paper from the journal Science here.

So are cats more sophisticated than dogs when it comes to drinking?

But Wait, There Is More Evidence!

Some Harvard scientists say that dogs might be messier (more on that later) but they are using the same force of inertia as cats are to get the water from the water bowl into their mouths.

Both studies filmed their respective animal subjects drinking using a high-speed video recorder. The Harvard scientists even captured a dog drinking with X-ray video to defend their canine companions.

The video evidence is in and it looks like both dogs and cats use the same mechanism to lap up liquids.

How Do They Do It?

Dogs and cats both must overcome the force of gravity keeping a liquid in a dish in order to get it into their mouths. Some animals, like both humans and horses, have large cheeks and so can easily form a seal with a horizontal body of water and suck up a nice, cool drink.

Dogs and cats don‘t have cheeks that are big enough or cheeks that extend far enough forward to do this.

Instead, dogs and cats use their tongues to capture a column of water using inertia to defeat gravity. Inertia is the tendency of an object to resist change in movement.

So if water in a dish is undisturbed, it will stay in the dish because the dominant force acting on it is gravity. But if the water is somehow pulled upwards, then it will keep moving upwards until another force (mostly likely gravity again) changes its motion.

To pull water upwards, both dogs and cats curl the ends of their tongues towards their bottom jaw when drinking. This portion of the tongue that is then situated horizontally does form a sort of a scoop, but more importantly, it pulls a column of water up as the animal pulls its tongue back into its mouth.

The inertia of the water upwards momentarily overcomes the force of gravity previously keeping the water in the dish. The column will stay intact long enough for the animal to close its mouth around it, capturing part of the column before gravity again becomes the dominant force and pulls the remaining water back down.

Why Are Dogs Messier?

You might be wondering why, if the two animals drink in the same way, your dog will leave little puddles of water around its bowl while your cat leaves no trace that it was even at the water bowl.

The Harvard study found that dogs are messier drinkers than cats because dogs push their tongues further down into the container of water than cats do – which results in noticeable sprays of water when the dogs retract their tongues.

This means that although dogs do still drool, they are as sophisticated as cats when it comes to getting water from a dish into their mouths.

So the debate "dogs versus cats" rages on, or is it really "dog owners versus cat owners"? Both animals have their special advocates.

This drinking debate was started when MIT scientist Roman Stocker was observing the elegant way his cat was drinking during breakfast and dog lover and Harvard scientist Professor Alfred Crompton is quoted by the BBC explaining the purpose of the study as: "We felt that we should stand up for the dogs and write this paper."

Read more about these studies below, and don‘t miss the article "Dogs Do Drink Like Cats After All" – it shows an X-ray film of a dog drinking!

Dogs Do Drink Like Cats After All (Discover Magazine)

Cats And Dogs Use Same Technique To Lap Up Liquid (BBC)