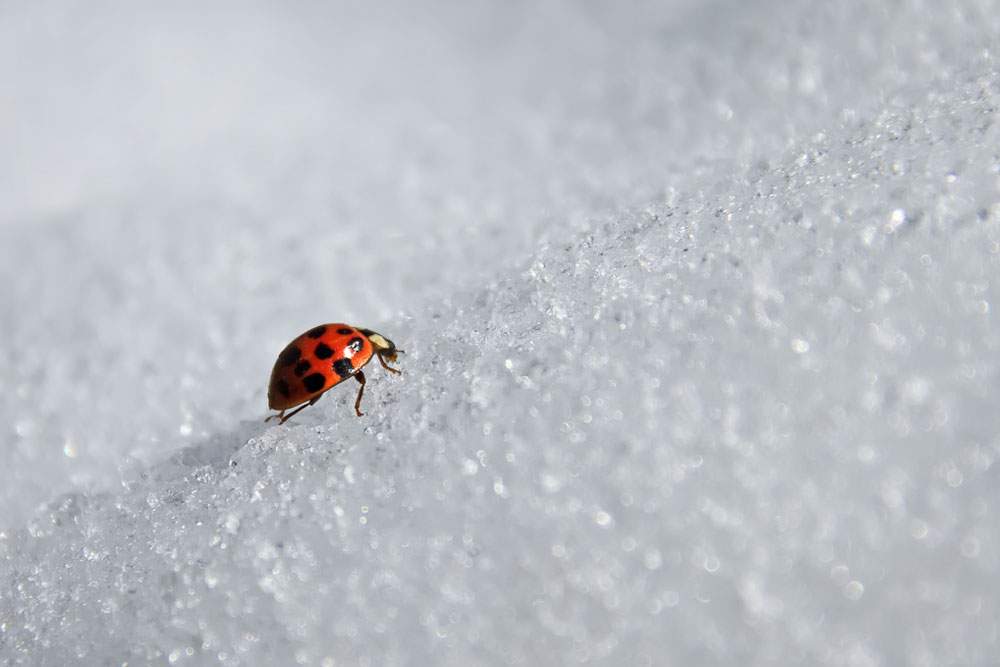 Ever seen a cricket wearing a parka? Probably not, but you might have wondered how insects make it through the winter! After all, they're cold-blooded, so their body temperature is pretty close to the temperature around them! Why don't bugs turn into popsicles?

Well, some do, of course. In a lot of insect species, only one stage is adapted to live through winter cold. For example, in some species, only those in the pupa stage, wrapped in insulated cocoons, can stay warm enough to survive. Other bugs, like mosquitoes and grasshoppers, don't survive the winter themselves, but they lay their eggs in deep water or soil that won't freeze hard. As long as their environment doesn't freeze, the eggs will hatch in the spring.

Some adult insects and spiders actually do live through the winter, either by burying themselves deep in the ground, where the temperature is more moderate than the air temperature, or, of course, by moving into warm buildings!

Most bugs survive the winter's cold by undergoing diapause, or insect hibernation. No one knows whether bugs in diapause actually sleep, but most are totally inactive. Like animal hibernation, diapause drastically lowers a bug's metabolism, allowing it to survive all winter on its stored-up body fat.

Many diapausing bugs can survive even if their body temperatures drop below freezing. How? By making their own antifreeze! In diapause, insects' bodies produce different types of alcohol. The alcohol in the bug's system lowers the freezing point of its body fluids. This natural antifreeze lets many insects survive winter's below-freezing temperatures, and wake up to make even more bugs next spring!