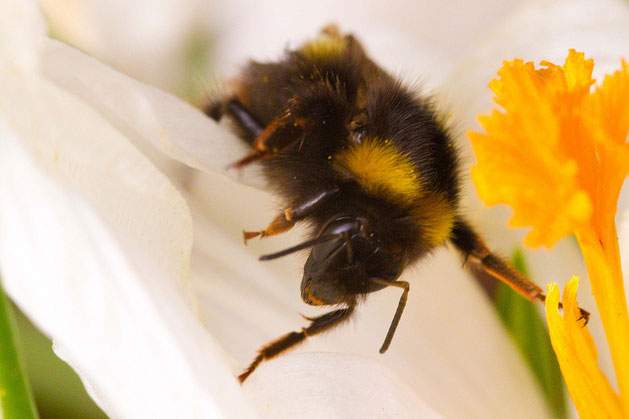 A phenomenon called colony collapse disorder occurs when worker honeybees abruptly disappear from a beehive. Such disappearances have been on the rise since 2006 in North America and Europe. Both beekeepers and scientists are worried.

Some suspect that neonicotinoid pesticides might be partially responsible for the rising collapse rates because they're used worldwide. In the United States, they are commonly sprayed on corn and soybeans.

The pesticides are chemically related to nicotine. They are less toxic to mammals than previously used insecticides and thought to be safer. But this may not be the case for bees.

To determine if the pesticides might be partially responsible for declining bee populations, scientists have been measuring their behavioral effects. British scientists exposed bumblebees in the laboratory to typical levels of a neonicotinoid pesticide, and then allowed them to live naturally under field conditions. Treated colonies suffered from significantly reduced growth rates, and eighty five percent reductions in production of new queens.

In a separate study, French scientists exposed honeybees to another neonicotinoid pesticide, and radio tagged the workers to track their ability to return to the hive after being released a half mile away. They found that exposure caused worker bees to be less likely to return home, suggesting the pesticide impaired their ability to navigate. This resulted in high worker mortality that could put the colony at risk of collapse.

In January, 2013, the European Food Safety Authority stated that neonicotinoids posed an unacceptably high risk to bees. Current experiments are supporting this conclusion, and suggest that a ban on these types of pesticides may be needed to protect honeybees worldwide.