Baby Pictures of a Solar System 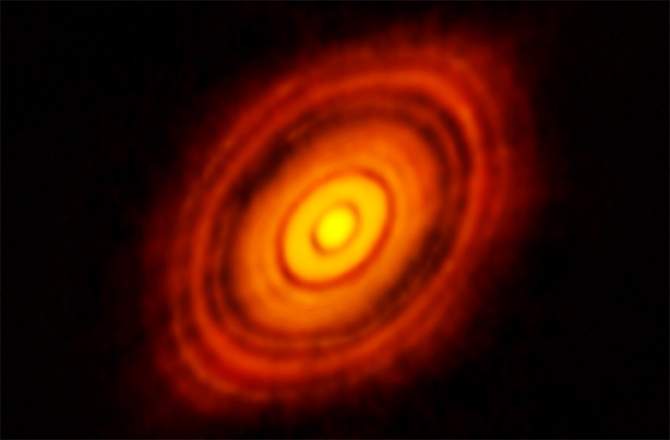 Solar system HL Tauri is a baby, only one million years old. Its nickname is HL Tau, and it lives in the Taurus constellation, 450 light-years away. Astronomers are as excited to see its picture as new parents staring at an ultra-sound, and hereâ€˜s why:

The Power of Telescope Resolution

The images come from the Atacama Large Millimeter/submillimeter Array (ALMA), a telescope with excellent resolution.Â Â ALMA can detect light in the microwave and radio-wave spectrum, so it can see through the dust and gas that hide HL Tau from visible-light telescopes.

Astronomers were surprised to see the picture of HL Tau because of the gaps between the rings around the star, a detail that had not been observed through telescopes with lower resolution.

Around the star rotates a protoplanetary disc of dust and gases. Out of this fiery disc will emerge planet embryos, or protoplanets. The gaps show where nascent planets forge their own orbits, either by pushing away the debris or incorporating it.

"This is surprising since such young stars are not expected to have large planetary bodies capable of producing the structures we see in this image," said Stuartt Corder, ALMA Deputy Director.

Within the protoplanetary disc, particles of dust bump into each other and sometimes they stick together. Gradually the colliding particles grow to the size of grains of sand, and then pebbles. Eventually the dust becomes asteroids, comets, and planets.

Most of what we know about planet formation and the emergence of our own solar system comes from theory. Detailed images like the one captured by the ALMA were the work of artists and computer simulators, until now.

"This one image alone will revolutionize theories of planet formation," said Catherine Vlahakis, a lead scientist with the ALMA.

Four and a half billion years ago, our sun was surrounded by a protoplanetary disc, similar to the one around HL Tau. Astronomers expect that the image will help us understand how our own solar system developed.