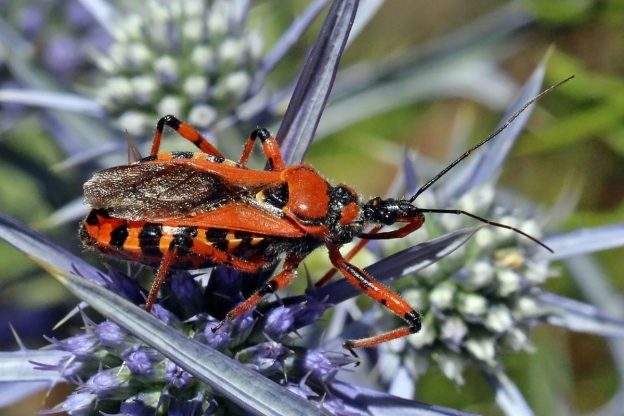 The assassin bug feeds on fellow insects and gets its scary name from their hunting prowess. (Charles J. Sharp, Wikimedia Commons)

On the last episode of A Moment of Science, we talked about true bugs. They're distinguished from other insects by the design of their mouthparts and the way they eat.

It was also established that though most true bugs eat plant sap, some feed on animals. One such true bug is the assassin bug, which feeds on fellow insects.

They get their scary name from their hunting prowess, and to an insect, they may very well be scary. They're strong and good at overpowering victims much larger than themselves.

They have raptorial forelegs similar to a praying mantis, meaning they're covered in teeth-like extensions used for grasping prey. Their rostrum, the tube they use for sucking up their meals, is curved outward from their heads in such a way that it can swing out to pierce their victims.

Once an assassin bug pierces an insect, it pumps a salivary secretion into the victim's body. This secretion not only paralyzes the prey, but it dissolves the insect's insides.

In effect, the secretion digests the meal before the insect sucks it up. After it dines, all that's left of the prey is a dry exoskeleton.

Assassin bugs can also bite humans. Their bite is quite painful because the secretion kills off a small area of cells.