The Alien 'Brain' Of The Box Jelly 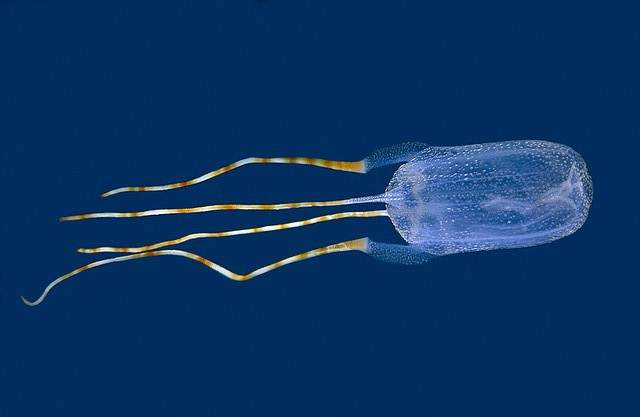 Jellies are often misleadingly called jellyfish, but they are not fish at all. They are very different creatures belonging to the phylum cnidaria.

Evolving independently from other animal groups for more than 600 million years, cnidarians have a distinctive body plan that is strangely different from our own.

While most familiar animals (including humans) are bilaterally symmetrical meaning they are symmetrical only with respect to one plane jellies are radially symmetrical. Slice them in any direction down the center and the two sides will be nearly perfect reflections of one another.

Jellies also have a bell-like medusa, which contracts during swimming and trails stinging tentacles that help catch prey and defend against predators.

The Creature With 24 Eyes

Cnidarians are the earliest animals to have evolved a nervous system.

It used to be thought that modern jellies possessed only a simple net of nerve cells spread through the body, but more recently scientists have found that two groups of jellies box jellies (cubozoa) and hydroids (hydrozoa) have evolved a central nervous system that brings nerve cells together where they can interact with one another more extensively to generate more complex behavior.

Because of radial symmetry, however, this central nervous system is alien to that of any other animal group.

The central nervous system of the box jelly consists of four prominent sensory clubs equally spaced around the bell of the animal, which contain nerve centers. A nerve ring interconnects the four clubs.

Each club contains six eyes. Four are simple pits, but two are more sophisticated and have lenses. In all, each box jelly has 24 eyes.

Like those independently evolved by fish, squids and octopi, the lenses of box jelly eyes are thick spheres capable of forming clear images underwater.

Box jellies can use vision to avoid obstacles and direct their swimming in particular directions. They have complex fish-like behavior and actively hunt their prey.

Evolution is a matter of both chance and necessity. The box jelly's eyes resemble those of fishes and octopi because necessary laws of optics must be satisfied to make a working eye. But living things are also the produce of a million historical contingencies that might have been otherwise.

Is bilateral symmetry really better for evolving complex brains? Or might it just be an accident of history that Earth's smartest animals have only one brain and two eyes?