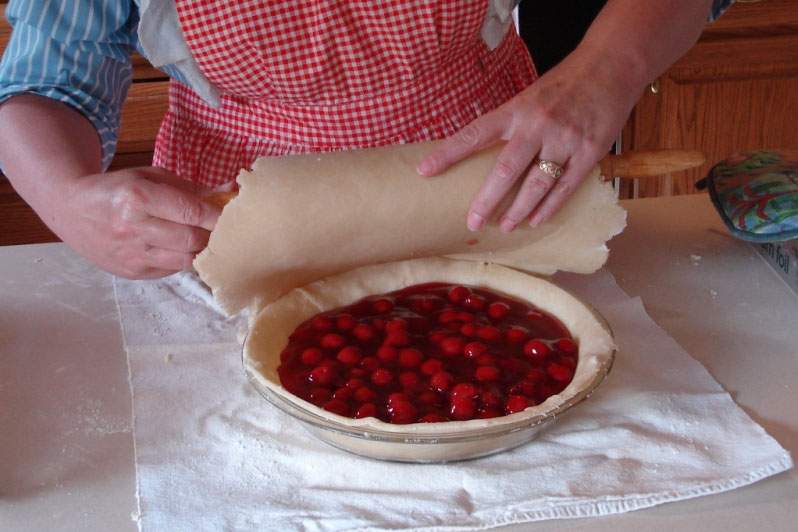 If youâ€˜re entering the county fair pie-baking competition, hereâ€˜s a tip: use vodka. No, you wonâ€˜t make the judges tipsy. Instead, the special ingredient of ethanol--the chemical name for alcohol (you'll also see it referred to as ethyl alcohol) --makes a particularly light and flaky crust.

A pie crust is made of flour, some form of fat (such as butter or lard), and a liquid, which is often water. The liquid in your crust is necessary because it holds the dough together.

But when you use water, you activate gluten. Gluten is a combination of two proteins that structure the dough as theyâ€˜re stretched in the mixing. While having some gluten in your crust is good, too much makes the dough tough.

80 proof vodka, at only 60 percent water, holds the flour and fat together without activating too much gluten. Use plain vodka as half the required liquid in your dough, and most of the ethanol bakes off in the oven, leaving you with a flaky crust (and no vodka flavor). Or replace all the water with a strong spirit if you want to taste, say, a bourbon-infused crust with your pecan pie.

While at the fair, you might discover alcohol in other bready foods, too--such as in the batter for fried fish. Beer has carbon dioxide, which dissolves at low temperatures--not hot.

So when that beer batter hits the hot frying oil, it bubbles, because it isnâ€˜t soluble. Foaming agents in the beer, including some proteins, stop these carbon dioxide bubbles from bursting quickly.

The result? A bubbly batter thatâ€˜s lacy and crispy. Now you know: whatever crust youâ€˜re making, add a little alcohol, and you can wow the judges.

Thank you to Susan Ebeler of the University of California for reviewing this episode's script.