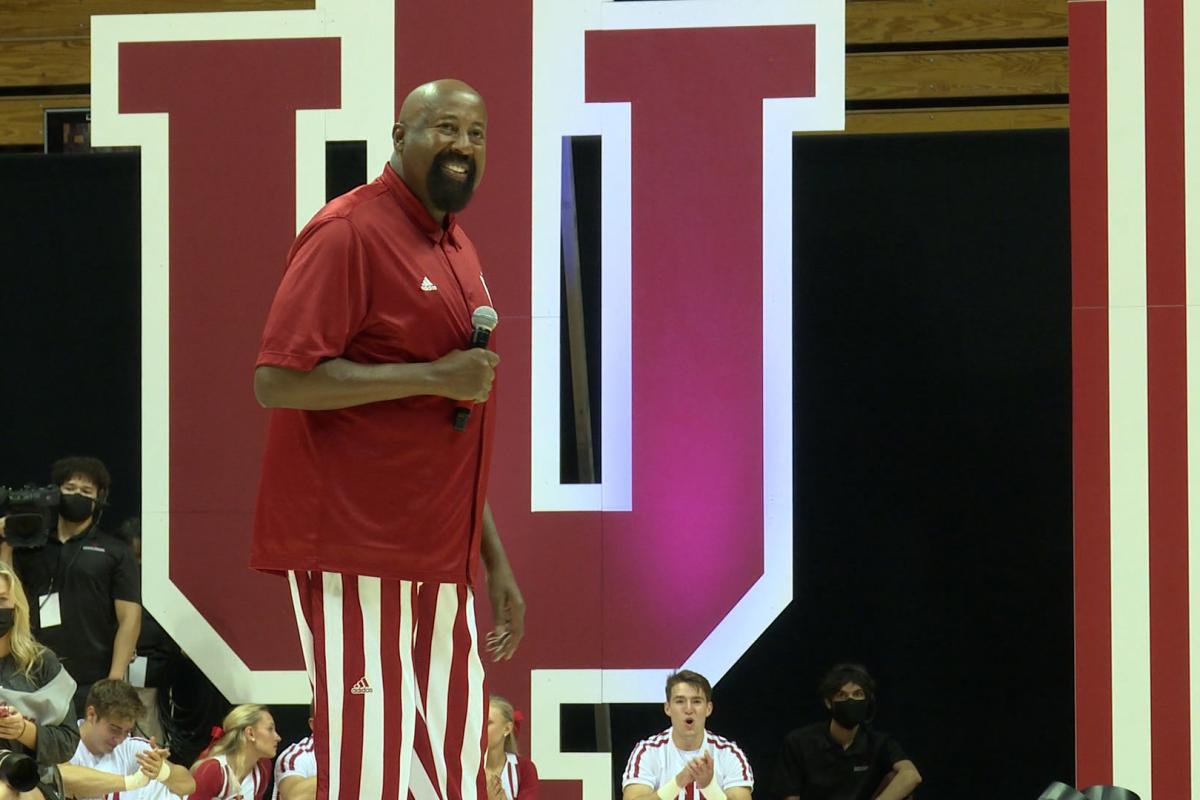 It was a Hoosier homecoming for Indiana men’s basketball coach Mike Woodson Saturday – and for the several thousand fans who filed into Assembly Hall for the first time in more than a year and a half.

The occasion was Hoosier Hysteria, the annual fan fest introducing the IU men’s and women’s basketball teams for the upcoming season.

And for Woodson, was the first time on the court as the Hoosiers’ head coach.

“It feels good to be home,” Woodson told the cheering crowd.

Woodson was a two-time All-American player at Indiana from 1977-80. He was hired in March to succeed Archie Miller, who was let go after four lackluster seasons.

He was joined on court by former Hoosier teammate Isiah Thomas, who won a title at IU in 1981 before a Hall of Fame career in the NBA.

Thomas said his biggest regret was not winning a title the year before, in Woodson’s senior year. He said that team was better than the 1981 team, but Woodson missed significant time due to a back injury and Randy Wittman missed the end of the season with a foot injury, and they lost in the NCAA Sweet 16 to Purdue.

“I watched No. 42 (Woodson) and No. 41 (Butch Carter) take off their jerseys for the last time,” Thomas said. “I was so hurt that day. I felt I hadn’t given enough to bring this man a championship he so deserved.”

But he’s certain Woodson is the right man to revive a program that won its last national championship in 1987 and hasn’t been to a Final Four since 2002. The Hoosier’ last Big Ten title came in 2016, and they went four season under Miller without beating arch-rival Purdue.

“You’ve got a coach here, a man here, who talks about a journey and bringing us back, putting us on top,” Thomas said.

Woodson said that’s the reason he returned to college basketball after a 40-year career in the NBA as a player, then as a coach.

“This not about Mike Woodson,” he said. “It’s about the 17 players who wear this Indiana uniform. I came back for you guys, nothing else.

The Indiana women’s team has been making its way there already under head coach Teri Moren.

They’ve become regulars in the NCAA tournament, and last year reached the Elite Eight for the first time in school history. But the run ended there with a loss to Arizona.

“Last year was incredible on so many fronts,” Moren said. “To get to the Sweet 16, to play in the Elite Eight, to be one game from a Final Four. That’s the goal, to play in Final Fours.

"We had a taste of what that looks like, and, as I said to the team, we will be back.”

The Hoosiers return all five starters from that team, including guard Ali Patberg, who had the option of coming back after graduation for an additional year of eligibility.

“A blessing from COVID is that I had the choice if I wanted to come back,” Patberg said. “After we went to the Elite Eight, I thought, my choice is to come back and have an opportunity to win a national championship.”

After player introductions, the teams paired off for a 3-point shooting contest (won by Grace Berger and Parker Stewart) and a skills competition (won by Mackenzie Holmes and Rob Phinisee) before the the men’s dunk contest (won by Trayce Jackson-Davis).

The women open the season Nov. 5 against the University of Indianapolis. The men open their season on Nov. 9 vs. Eastern Michigan.