With goals out of reach, Indiana football looks to finish season strong 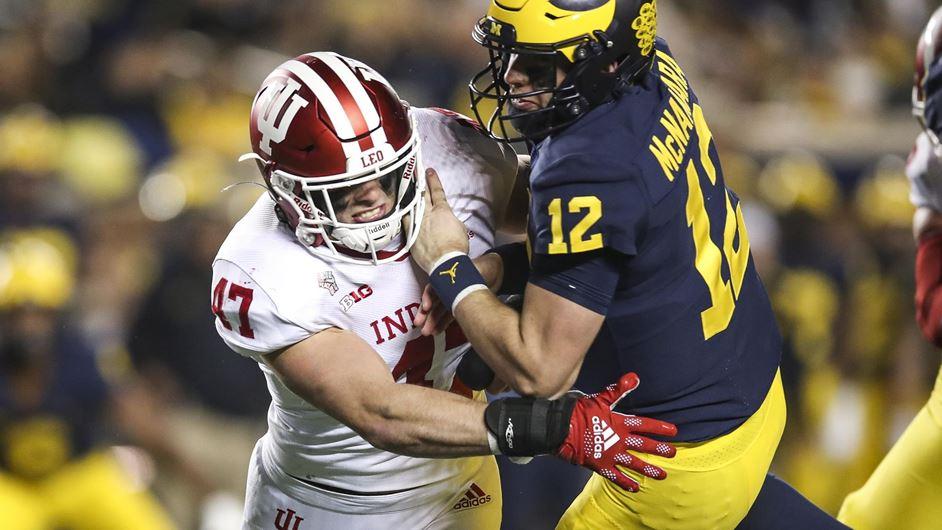 Pretty much all of Indiana’s goals heading into the football season are now out of reach.

Competing for a Big Ten title pretty much went out the window with an opening day loss to Iowa.

And a fifth straight loss on Saturday at No. 9 Michigan left the Hoosiers with a 2-7 record and ended any hopes of appearing in a third straight bowl.

Life hasn’t been easy for Indiana.

Coming into the season ranked No. 17 on the heels of one of its best seasons in more than a half a century, expectations were high for the Hoosiers in 2021.

A 34-6 loss at Iowa in the season opener set the tone for the season. Injuries at quarterback and in the defensive backfield have left the Hoosiers vulnerable on both sides of the ball.

True freshman quarterback Donaven McCulley started a second straight game at Michigan Saturday and threw for just 88 yards in the 29-7 loss that dropped the Hoosiers to 0-6 in the Big Ten.

Indiana has three games remaining on the schedule, beginning with Saturday at home against Rutgers.

“I think the objective is to win the game, so if those younger guys were in position to help us do that, then they'll be the ones that are going to play,” Allen said. “Obviously, that's our whole objective, to continue to help this team finish strong and, due to injuries, you're probably going to have a lot of younger guys have opportunities because of that.”

Both return to practice this week. If either is able to play, it could afford Allen the opportunity to still redshirt McCulley this season as he’s only appeared in four games, the maximum allowed for a player to still take a redshirt season.

“The whole objective is, No. 1, whoever is in there is going to need to be able to be healthy, and we’re not going to put them out there if they're not,” Allen said. “But, No. 2, it is what do we got to do to be able to help us be successful on Saturday. So, that's part of it.

“But those are discussions we've had to make, and it's all based upon the health of those other two guys, and we're going to let these guys prepare this week, and we'll see what happens.”

Regardless who starts at quarterback against Rutgers, Allen is leaning on the team captains to keep the team focused as they play the season out.

“I think that that's where your leadership has to come through very strong, and that's going to be -- going to meet with some more of those guys as the week progresses and just rely on that,” Allen said. “We need those guys to step up, and it is truly an issue of what you're made of on the inside and how hard you're willing to prepare and to be able to be at your very best, because the bottom line is you're playing Big Ten football every single weekend, and it's going to be a dogfight to find a way to win these football games.”

Because that is the only real goal left for the Hoosiers.