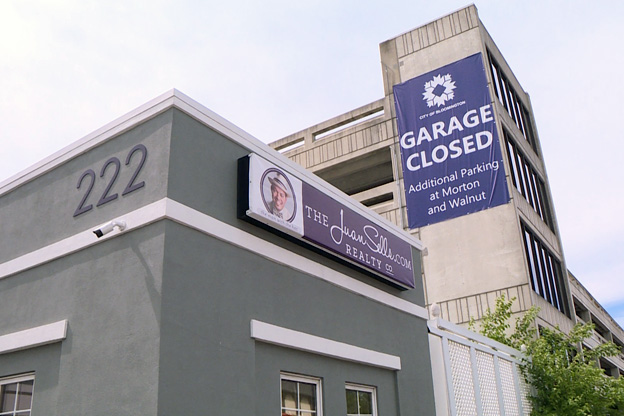 "The Court, being duly advised and considering the briefs of both parties, now denies the Motion, as the proposed Amended Complaint does not conform to the evidence previously presented to the Court,” the order reads.

The city had been trying since summer to use eminent domain to take Carrasquel’s building on the corner of Third and Walnut to expand the Fourth Street Garage, but Harvey ruled in December it could not do so because plans called for retail space on the ground floor, which is not a public purpose.

The city responded with a news release Wednesday afternoon.

It reads as follows:

"We are extremely disappointed that a local court has ruled in an eminent domain action that a public garage does not constitute a public purpose. Eminent domain provides a fair and equitable way for public projects to acquire private land needed for public good--whether a park, a path, a road, or a public garage--while providing the fair market value of the property to the original owner. The City sought to design a garage that would reflect the active center of our downtown, which included an activated first floor with space dedicated to uses other than parking and residential space, as is required by our local ordinances. After the Court decided that the City's design, which incorporated an ancillary space on a portion of the first floor of the garage that was intended for lease to a local nongovernmental organization or commercial business such as a coffee shop or restaurant, did not serve a public purpose, the City redesigned the space to have a purely governmental use related to the parking garage. Unfortunately, the court has prohibited the City from proceeding with its public project under either design.

Currently, we are assessing all options before us and hope to move forward with a new, efficient, green public garage."

Carrasquel says he’s happy to put the issue to bed for now, but acknowledges the fact the city can still appeal the lawsuit.

“Of course, I’m very thrilled and happy and I hope that I can continue with my life,” he says. “This has been a tremendous disruption of my personal and business life, and definitely [took] a very heavy toll on [my] financials and psychological. So I’m glad that this is over and I can continue my life as normal.”

He says his next step is seeking compensation from the city for legal fees spent defending his property.