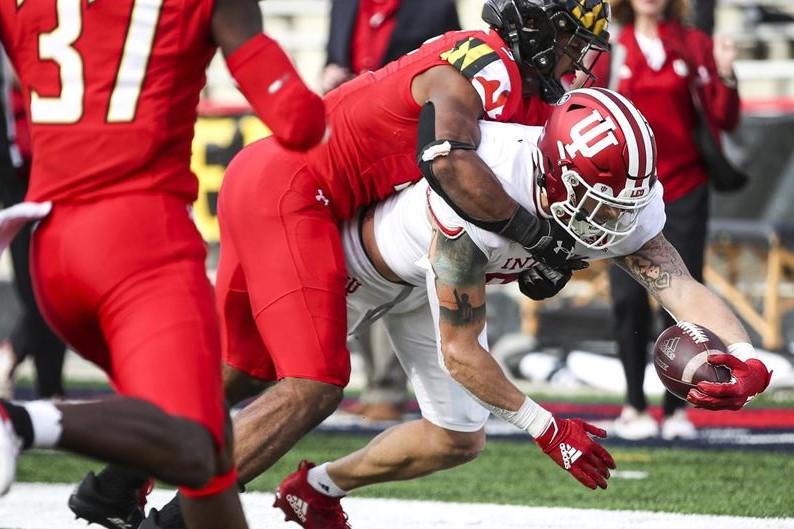 Reality is setting in for the Indiana football team.

A fourth straight loss Saturday at Maryland has left the Hoosiers 2-6 overall and needing to win their final four games to qualify for a bowl game.

Heading into the season, a trip to a bowl game seemed a no-brainer. Indiana was ranked No. 17 in the preseason Associated Press poll and had appeared in two straight bowl games.

Now, the Hoosiers are just trying to win a game.

“This is just trying to find a way to compete at a high level and play at a high level and win Big Ten football games,” Indiana coach Tom Allen said Monday. “So, to me, that's the whole goal. We've got to play our best football — all three phases working together, complementing one another, playing our best on Saturday.”

They’ll need it this Saturday when the Hoosiers travel to Ann Arbor to face ninth-ranked Michigan for another nationally televised, prime-time game.

“That is going to be a tough, tough, tough test for us as we progress through our season and continue to seek a victory,” Allen said.

True freshman Donaven McCulley is expected to start at quarterback for a second straight week with starter Michael Penix out with a shoulder injury and backup Jack Tuttle out with a leg injury. Both remain week-to-week, Allen said.

McCulley threw for 242 yards and two touchdowns in Saturday's 38-35 loss at Maryland. And while Allen said he had hoped to redshirt McCulley this year and get him ready for next season, right now, he’s atop the depth chart at quarterback.

“Donaven is the healthiest right now, and he is the guy that we're getting ready to play,” Allen said.

This time last year, McCulley was wrapping up his career at Lawrence North High School in Indianapolis, where he threw for 6,211 yards, rushed for 1,274 yards and had 47 total touchdowns.

At 6-foot-5 and 215 pounds, Allen expects McCulley to get bigger — and better.

“I think there's just a competitive toughness to him,” Allen said. “He doesn't back down. He didn't back down when he first got thrown in there against Ohio State. He attacks things. And believes in himself. Has a pretty calm demeanor, you know, doesn't get frazzled. … He has ability to just extend plays and find guys open down field. And if he has to run, he can run it.

“So, all those things. I love his attitude. I love the way he approaches things every day. He's a humble guy. He's a great teammate. And he's a hard worker. So a lot of good qualities that makes you excited to have him.”

McCulley was aided by the Hoosiers’ best offensive output since a 56-14 win over Idaho in Week 2. Saturday’s game included a season-best 136 yards rushing and a pair of touchdowns from running back Stephen Carr.

Injuries have not only affected the offense. All-American cornerback Tiawan Mullen has been out much of the season with a foot injury and played sparingly against Maryland. Fellow cornerback Reece Taylor missed his third straight game, and safety Josh Sanguinetti also missed the game.

“We’ve got to be able to find creative ways to get our guys on the field and put them in position to make plays,” Indiana defensive coordinator Charlton Warren said. “And have coverage concepts that play to the strengths of the guys that have to be in there.”

Michigan’s forte has been running the ball. The Wolverines lead the Big Ten in rushing with 239.9 yards per game and 25 rushing touchdowns.