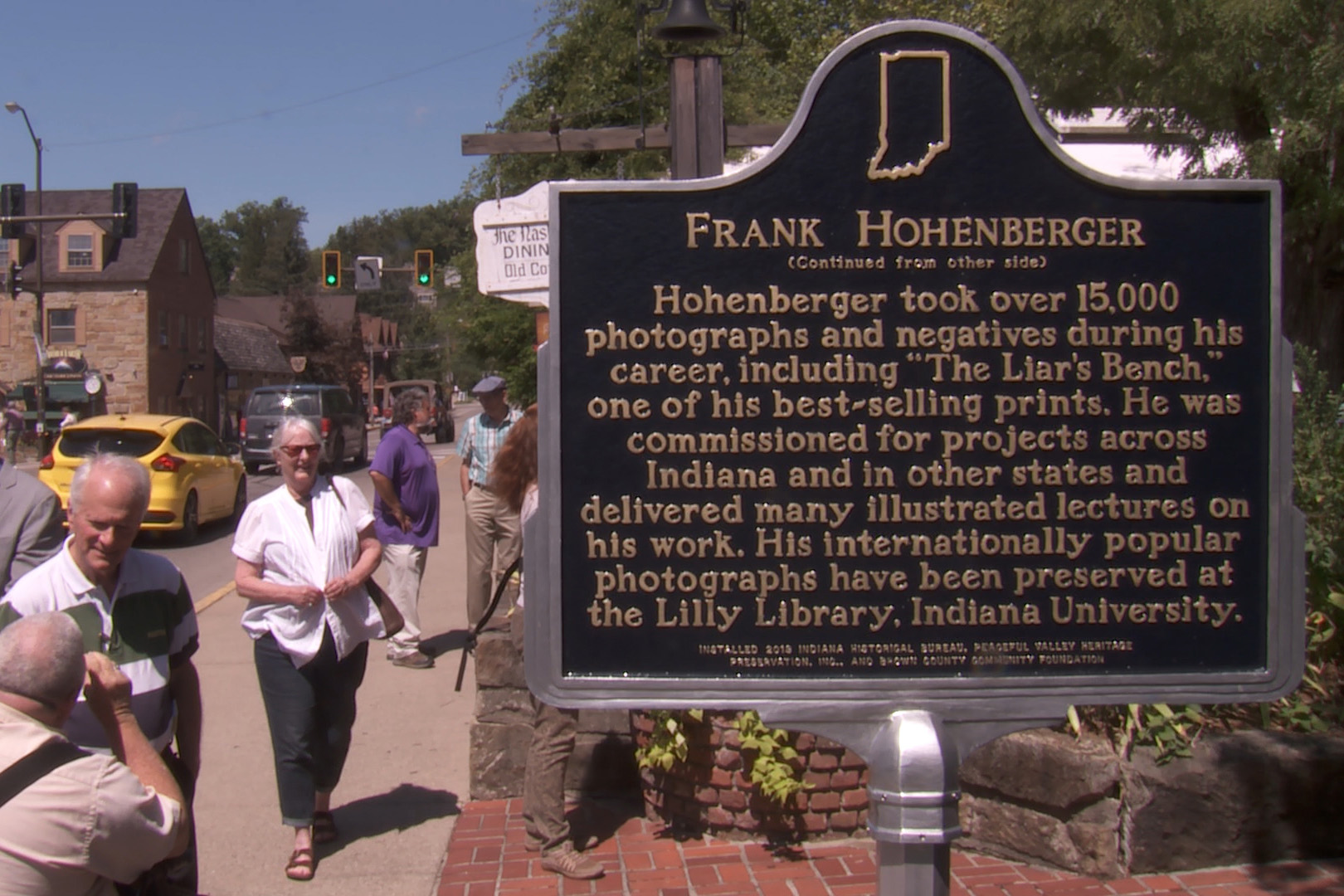 A photographer known for capturing snapshots of Brown County history is now making history himself.

A group gathered outside The Nashville House Thursday afternoon to unveil a state historical marker for Frank Hohenberger. The Indiana Historical Bureau, Peaceful Valley Heritage Preservation and the Brown County Community Foundation worked together to secure the marker.

It celebrates Hohenberger's contributions to Indiana, where he captured thousands of photos.

Frank Hohenberger was from Ohio and didn't make his way to Brown County until he was 41.

He was working at H. Lieber Co. in Indianapolis at the time, which had a photography lab. Someone brought in a roll of pictures to be developed that showcased Brown County's landscape. Hohenberger decided he had to see it for himself and made his first trip in 1917.

"He came down, instantly fell in love, and within a week he had quit his job, moved down to the Ferguson house which was a boarding house in town, and he lived there for several months until he got settled," says Buzz King.

King grew up with Hohenberger around. The two even shared a birthdate and celebrated together every year. King's father and uncle drove Hohenberger all over the region to help him capture his famous photos.

King says Hohenberger was very intentional in his work, oftentimes waiting for long periods at a sight before taking a picture.

"When he thought it was just right he’d get up, pull the dark slide out, snap a picture and go," King says. "And, what he was doing was he was waiting for the sun to be just right, so the shadows added to the picture."

Hohenberger started by photographing the landscapes and buildings in Brown County. The steep hills and rugged dirt roads made travel much more difficult in the early 1900s, so many Hoosiers had never seen such a place. They came to know it through pictures and stories Hohenberger shared in his "Down in the Hills O' Brown County" column, which the Indianapolis Star published starting in 1923.

"That Indianapolis Star article then talked about the people here and things that he had learned," says Rick Kelley, a Brown County native who's given several presentations on Hohenberger. "I think it sounded like he talked to Allie Ferguson and others about the gossip and then printed that in the Indianapolis Star, which sometimes angered the local people. And, other times I think they were flattered by what he said."

It wasn’t done in jest – Hohenberger was enamored with the people of Brown County.

“When you are driving along the highways, make it a point to ask the natives some questions about locations, neighbors, crops and morality, and I’ll warrant you’ll not be disappointed regarding the generally high estimate I have always placed on the intelligence of the population,” Hohenberger wrote in a 1924 column.

Hohenberger's vivid descriptions and pictures of Brown County started to draw people from all over to the quaint towns and villages. At first, their best option was to take the train to Helmsburg to get to the region. But, as more people came to Brown County, so did change.

"The automobile has proven a great benefactor to us," Hohenberger wrote in 1923. "Visitors used to regret the long waits between trains, but now we have taxi lines running in all directions."

Back then, there were only a handful of shops in Nashville. People came to Brown County not to spend money, but to take in the scenery and the people.

Many credit Hohenberger's photos with helping to drive tourism, which is now a muti-million dollar industry.

"Singlehandedly he's one of the people who put Nashville and Brown County on the map," King says. "Not just in this country, but internationally."

Visitors can find Hohenberger's photos proudy on display throughout Nashville, including at the Brown County Library, the Hobnob Corner Restaurant and a public restroom downtown.

Now, a historical marker also recognizes his contributions to the community. It sits in front of The Nashville House, which closed last year. The owners reopened the space for the dedication of the marker Thursday, giving people a chance to see some of the Hohenberger photos inside.

King says no one is more deserving of the honor.

"His timeless black and white photographs were viewed by millions of eyes in wonderment and awe, and always associated with Brown County, Indiana," King said at the dedication.

Locals hope the marker will expose more visitors to Hohenberger's work, which they say helped make Brown County what it is today.

"I don't know that there's a legacy of photography in Indiana that could even come close to equaling Frank's contribution," Kelley says. "Nine thousand plus, I think there's actually more than that."

Hohenberger wanted his archive destroyed, but Indiana University President Herman B. Wells apparently convinced him to donate it to the Lilly Library instead. You can view thousands of Hohenberger's photos online.

The pictures tell a valuable story of Brown County History – one that illustrates just how much a place can change, while also remaining the same.

Kelley says he feels that Hohenberger is still very much present in Brown County today.

"I think that in spirit I feel that way. That Frank with his photography is wandering the hills here."