Stars align as No. 8 Indiana women put away No. 13 Kentucky 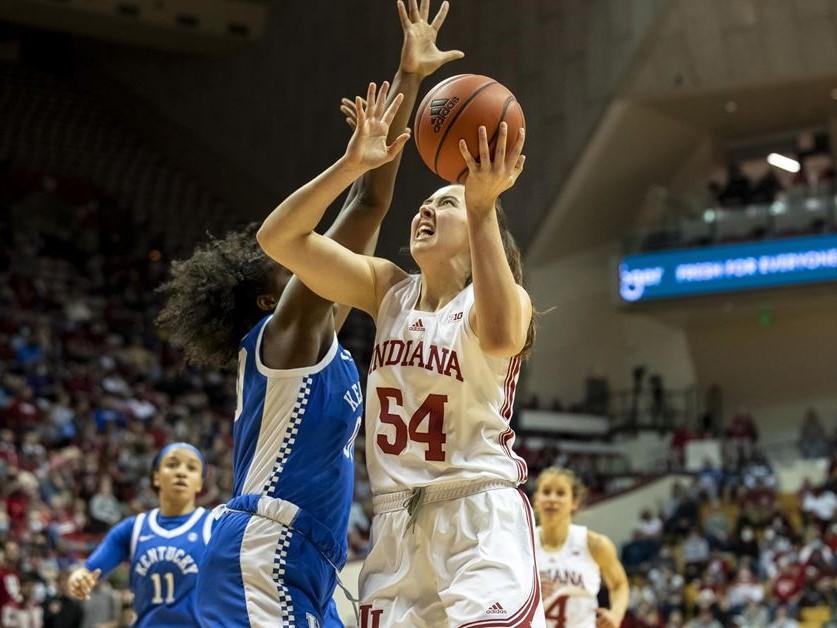 The stars showed up for No. 8 Indiana on Sunday.

Mackenzie Holmes scored a career-high 29 points and fellow preseason All-Big Ten selection Grace Berger had 19 as the Hoosiers pulled away from No. 13 Kentucky in the second half for an 88-67 victory.

“I hope this comes out the right way, but I expect that from them,” coach Teri Moren said. “I know they’ve put in the work. I know and the staff knows they’re talented. It’s just making sure whether we’re play-calling over on the sideline or sometimes just allowing them to play, they’ll figure it out.”

Berger hit a half-court buzzer-beater that gave Indiana a 38-32 lead at halftime.

Nicole Cardaño-Hillary scored all 12 of her points after the break for Indiana.

“We wanted to come out and start hot and stay hot for four quarters, but when you’re playing a team like Kentucky, that’s not always going to happen,” Berger said. “We outlast a lot of teams, so I think that’s why we see in the late third and fourth quarter we kind of pull away.”

After missing her first six shots, Berger finished 6 for 16. She also had nine rebounds.

“I was obviously mad at myself because I was missing some shots I shouldn’t have been missing, but other than that I knew I didn’t really have a choice but to bounce back because I knew who we were facing today,” she said.

The game got physical and sloppy from the beginning, with the teams combining for 26 turnovers and 42 fouls.

Kentucky: The Wildcats had no answer for Holmes in the post all game. She often found herself unguarded beneath the basket.

Indiana: The Hoosiers beat Kentucky for the first time since Nov. 12, 2006, a span that included the teams going 14 years without playing each other. In last season’s matchup in Lexington, the Wildcats won 72-68 behind 22 points from Howard.

Indiana’s victory might help the Hoosiers climb to a new program high in the polls, helped by early-season losses from No. 3 Stanford, No. 5 North Carolina State and No. 6 Louisville.

Berger surprised herself with that shot from midcourt.

“I don’t practice half-court shots and when I do I’m usually pretty bad at them,” Berger said. “The basketball gods were on my side today with that one.”

Kentucky: Returns home to face Winthrop next Sunday, the first of five consecutive games in Lexington.

Indiana: Welcomes Norfolk State to Bloomington on Tuesday, its second of two home games before heading on the road to face Quinnipiac.