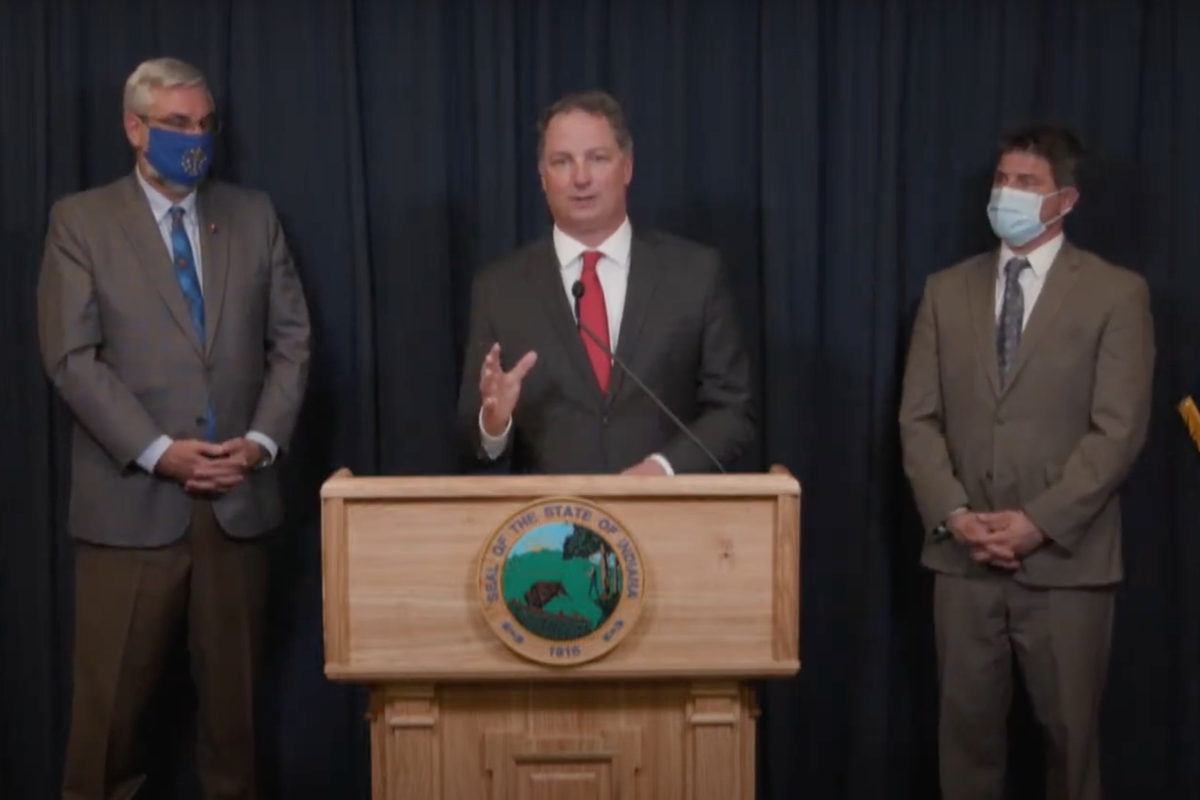 Legislative leaders are calling the new state budget a “historic win” for teachers, students and schools. Gov. Eric Holcomb and top Republican lawmakers announced the latest budget proposal Tuesday, which includes the state’s biggest investment in K-12 education — nearly $2 billion in state funding for schools over the next two years.

The announcement comes after the latest revenue forecast estimates an additional $2 billion for the budget debated in the House and Senate earlier this year, and education groups urged the state to "go big" on K-12 spending and teacher pay.

The injection of new dollars also comes after months of contentious debate between lawmakers, traditional public school leaders and advocates for school choice. At times, the factions agreed more money was needed for the state’s neediest kids.

“This is still siphoning funds away from our traditional K through 12 public schools,” Melton said.

The General Assembly will vote on final approval of the new budget within the next day or two. Few, if any, substantive changes are expected.

Here's what the budget plan includes for education:

The plan infuses existing education funding with another $1.9 billion over the next two years, which includes a 9.1 percent or $1.03 billion increase in tuition support.

It also adds funds for students in poverty, known as the complexity index – a critical issue for many school leaders. The amount per student would increase, but not by much, at just $100 more per complexity grant compared to 2021 levels.

The budget plan also includes, for the first time, a mandate on teacher pay: schools must spend 45 percent of the per-pupil funding they get on educator salaries.

According to data compiled by the governor's teacher compensation commission report, at least 100 school corporations don't currently meet that threshold.

“We’re hopeful that that helps those dollars get into the classroom and get into the teachers’ pockets, where we truly want them to be,” Bray said.

Lawmakers also plan on including language in the budget pushing schools to offer a minimum teacher salary of $40,000 a year, and if a school can't meet that benchmark, they'll be required to offer an explanation to the state in writing.

House Speaker Todd Huston (R-Fishers) pointed out the total amount budgeted for schools far exceeds the more than $600 million investment the compensation commission identified as the amount needed to make educator salaries competitive with surrounding states. He said lawmakers are trying not to be prescriptive, but will if the need arises.

“We’ve stepped up," Huston said. "Now, it’s time for locals to step up because we really don’t want to be more prescriptive, but with the type of investments we’re making, if it doesn’t get to teacher pay we might just have to be.”

Leaders also say the budget will include a provision to prevent schools from dropping teacher salaries to levels lower than the previous year, and pays off $600 million of teacher pension debt.

Lawmakers are also expanding school choice options under the proposal, after disagreements on the total amount in the Senate and House versions.

The new budget aims to expand income eligibility for choice grants – or vouchers for private school tuition – to more middle class families who earn more than $100,000 per year. It’s not clear how much of the education funding increase that will take up but Huston said public schools will get a more than $600 million increase.

The eligibility allows families with incomes at up to 300 percent of the eligibility for the free or reduced lunch program, starting in 2022. Federal guidelines allow a family of four with an annual income of $34,060 to qualify for free meals.

The new education scholarship accounts (ESAs) will be available to all special education students with a family income of up to 300 percent of the free or reduced lunch program.

Schools will also receive funding through grants and one time investments lawmakers are including in the budget.

The proposal includes a 30 percent boost for school-based social/emotional health programs, and increases funding for the Non-English Speaking Program by more than $5 million per fiscal year.

It also includes $37.5 million per year for Teacher Appreciation Grants, which go to teachers rated effective or highly effective on their performance evaluations, and provides $1 million each year for the Teacher Residency grant program.

The Indiana State Teachers Association has long-pressed lawmakers to take action on teacher compensation, most recently calling on the General Assembly to "go big" on K-12 funding in light of April's revenue forecast.

ISTA sent out a statement shortly after the budget announcement, calling it a "good day for students, educators and communities."

"With this budget’s investment, teachers now have a light at the end of the tunnel,” the statement said.

Indiana's Education Secretary Katie Jenner praised the new budget proposal in a statement as well, calling it a "transformational" increase that will position schools to recover from the COVID-19 pandemic even better alongside federal emergency funding.

Jenner also highlighted the line items addressing the compensation commission's recommendations, and said Hoosier educators will benefit from the latest proposal. Jenner was part of the commission before becoming the state's education secretary.

"These efforts will be critical to increasing teacher pay, strengthening Indiana’s teacher pipeline, and attracting and retaining our best and brightest to this purposeful, difference-making profession," Jenner said in a statement.