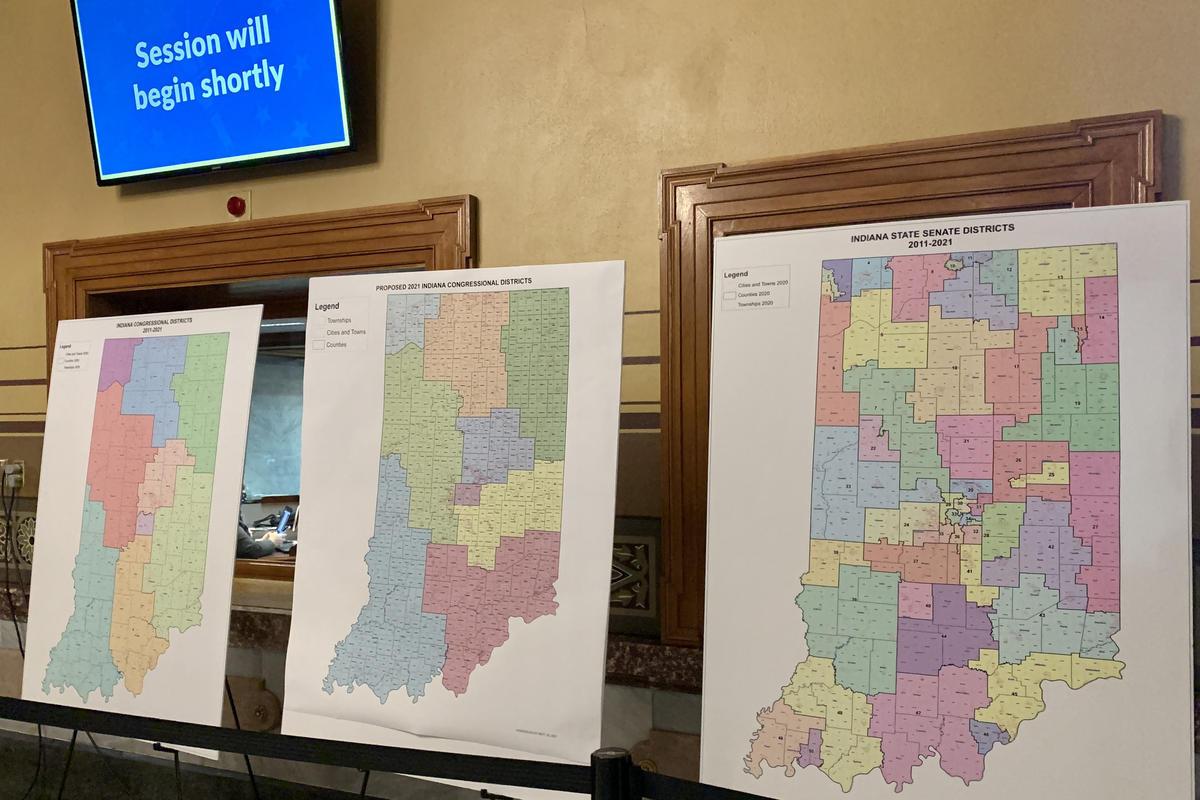 Republicans have virtually guaranteed they will maintain or grow their supermajorities in the state House and Senate and eliminate competitive Congressional districts under the new redistricting maps. (Brandon Smith/IPB News)

Hoosiers are one stroke of the pen away from having a big part of their political futures locked in for the next decade.

The Indiana House and Senate gave their final OK Friday to new legislative districts, sending the 2021 redistricting bill to the governor. The maps virtually guarantee Republicans will maintain or grow their supermajorities in the state House and Senate and eliminate competitive Congressional districts.

The GOP's Senate map, however, fractures the south side of Fort Wayne into three, predominantly rural districts that stretch counties away; it splits Evansville in half; it extends a sliver of a largely rural district into Marion County; and it separates West Lafayette and Lafayette into two, separate districts.

Senate Republicans rejected all efforts to address those concerns, which had been raised by Hoosiers who testified in the Senate Elections Committee's lone hearing on the map.

When asked whether the maps Republicans drew will create competitive elections, Koch said that wasn’t considered.

“There’s always competition," Koch said. "If not in the general election, in the primary and if not there, as time passes and population changes and political affiliations change.”

Democrats, like Sen. Karen Tallian (D-Ogden Dunes) said the Republican maps have all but ensured there won’t be competitive elections.

“The non-Republicans in the state of Indiana still make up at least 40 percent of the population … what’s happening is that those people are being disenfranchised,” Tallian said.

Senate Democrats also challenged Republicans on who, exactly, participated in the map-drawing process.

"Did a person of color participate in drawing the map?" asked Sen. J.D. Ford (D-Indianapolis).

"I don't know how to really – I don't categorize people by their race," Koch said. "So, I don't keep track of people by race."

On the House floor, Democrats, like Rep. Cherrish Pryor (D-Indianapolis), renewed their objections one last time.

“This is once again diluting the Black and minority vote and another form of voter suppression,” Pryor said.

Rep. John Jacob (R-Indianapolis) was one of only two Republicans who spoke on the House floor Friday. Jacob is considered one of the most extreme members of the legislature and doesn’t caucus with his fellow Republicans.

He said what the GOP has done is gerrymandering.

Jacob was one of four Republicans across the House and Senate who voted against the bill. He joined Sen. Ron Grooms (R-Jeffersonvile), Rep. Jeff Ellington (R-Bloomington) and Rep. Matt Hostettler (R-Fort Branch).

Grooms had already announced his retirement and endorsed a successor before the maps were unveiled. His district was combined with another Republican's. Ellington had expressed concerns last week about how his district was drawn.

The new districts officially take effect on Election Day next November and be in place for the next decade.