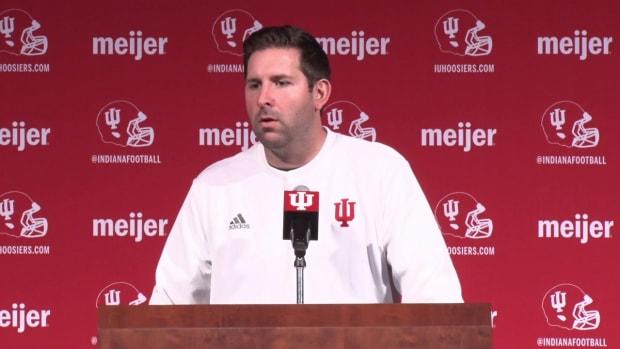 The move by head coach Tom Allen came one day after the Hoosiers ended the season with a 44-7 loss at Purdue.

After coming into the season with high expectations following its best season in a half a century, Indiana finished 2-10 overall and 0-9 in the Big Ten.

“I want to thank Nick for his hard work and commitment to the program,” Allen said in a statement. “He is a good football coach and a man of tremendous character, but we are in need of a reset on the offensive side of the ball.”

Allen said a search for a replacement would begin immediately.

Indiana finished 14th in the Big Ten in yards gained per game (289.8) and next-to-last in points per game (17.3). Against Purdue Saturday, the Hoosiers had just 204 total yards and were held to seven or fewer points for the sixth time this season.

Injuries at the quarterback position can be blamed for part of the struggles on offense. On Saturday, walk-on Grant Gremel became the fourth different quarterback to start this season. The running back position was also decimated by injuries.

But the Hoosiers didn’t fare much better on the defensive side of the ball, either. Indiana finished 14th in the Big Ten in total defense, allowing a league-worst 33.3 points per game.

“We did not meet the standard that I expect from out football program, and that starts with me,” Allen said. “This season was not acceptable, and we will work to address it.”

To free up money for a new coordinator, Allen restructured his contract to decrease his annual salary by $200,000 from 2022-25. Allen is under contract through 2027.