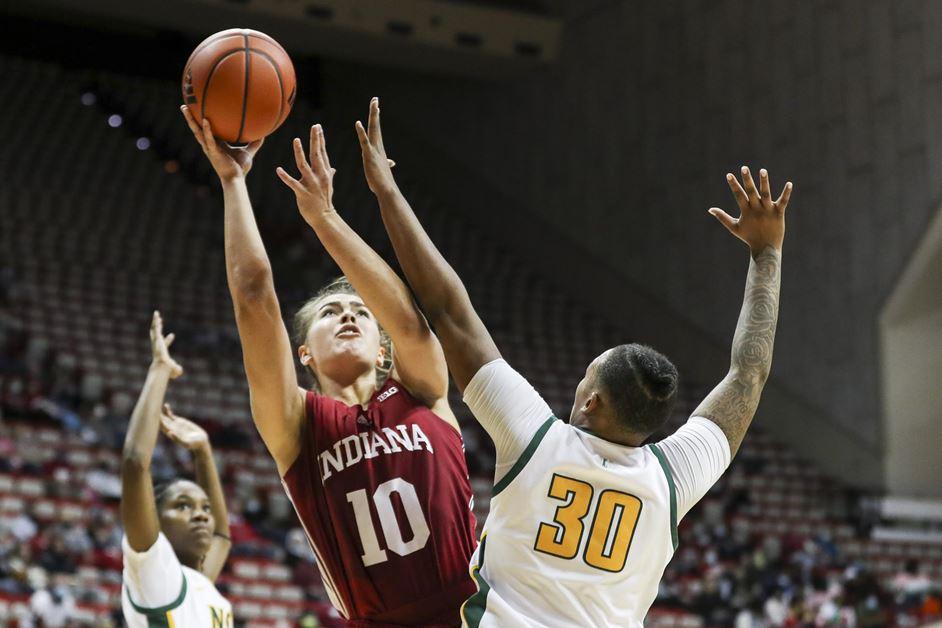 Indiana overcame a slow start and used a big run before the half to put away Norfolk State.

Mackenzie Holmes and Aleksa Gulbe each scored 22 points to help the No. 4 Hoosiers rout Norfolk State 72-42 on Tuesday night.

“We needed something like that,” head coach Teri Moren said in a postgame press conference. “Just to go on a little bit of a run and feel good about ourselves offensively.”

Holmes, who was named the Big Ten Player of the Week on Monday, scored 18 of her points in the first half. The Hoosiers (3-0) only led 22-21 in the second quarter before they scored the final 17 points of the half to go into the break up 18.

Gulbe added 12 rebounds as well for her first double-double of the season.

“Hopefully it’s gonna be the first of many,” Moren said of Gulbe. “That’s what I challenged her with. What she really provides for us is, she’s a terrific defender off the ball and I thought she was all over the boards tonight.”

Norfolk State (2-2) was led by Deja Frances, who scored 12 points for the Spartans. Norfolk State shot just 25% from the field.

Indiana had 22 assists on 27 field goals as a team. Holmes said the team aims to have 17 assists each game and credited their chemistry for its ability to share the scoring.

“It’s like Coach Moren says, sharing the sugar,” Holmes said. “That’s always a point of emphasis everytime we step on the floor.”

Indiana reached a new program-high ranking at No. 4, but Moren was worried her team might still be riding off its victory over Kentucky.

“One of the worries you have as a coach after such an emotional win is that your team comes back and they’re a little flat,” Moren said. “Not that they overlook anybody, I just thought they were a little flat tonight.”

Norfolk State: The Spartans struggled against their second consecutive Big Ten opponent after losing by 40 to No. 21 Ohio State on Sunday.

Indiana: The Hoosiers followed up their win over No. 19 Kentucky with a slow start but picked up the pace late in the second quarter and in the second half.

STAT OF THE NIGHT

Indiana committed 22 turnovers but only allowed 23 points off them. Moren said the team wants to keep that number under 11 and said the team has work to do to get there.

Indiana: Visits Quinnipiac on Saturday in the first meeting between the two programs.