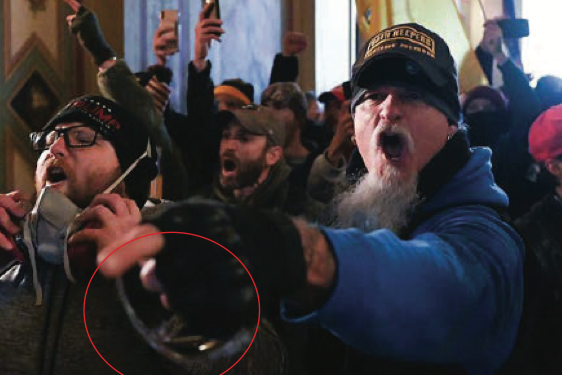 A federal judge ruled Friday, Jon Schaffer, the Indiana man accused in January’s insurrection at the United States Capitol, will remain in federal detention due to his perceived community risk.

Showing a video interview of Schaffer from a November rally for former President Donald Trump, attorneys argued Schaffer contemplated violence before he engaged in the insurrection.

“They’re making their big move and it’s not going to work,” Schaffer said in the video. “If someone wants to bring violence, we’re ready for that.”

Later in the video, Schaffer claimed “there will be a lot of bloodshed.”

His attorney, Marc Victor, dismissed the allegations pointing to another place in the video where Schaffer said he wasn’t looking for violence, but would respond if provoked.

Victor argued the Indiana man was not responsible for the insurrection and was encouraged by former President Trump.

Trump was impeached, but not convicted, for his role in the January 6th insurrection at the Capitol that killed five people, including a Capitol Police officer.

Indiana U.S. Senators Todd Young and Mike Braun, both Republicans, voted with their party to acquit.

“People have the right to believe the highest elected official,” Victor said during the hearing held via teleconference. “My client is not responsible for what happened on January 6.”

Schaffer, through his attorney, claimed to have been in the Capitol for 60 seconds, but that is disputed.

Officials say there is evidence linking Schaffer to the front of the crowd, and that the founder of the metal band Iced Earth was one of the first to breach the building.

A photo released by the U.S. Department of Justice that has been widely shared on social media showing the bearded Schaffer wearing an Oath Keepers baseball cap is misleading, his attorney testified.

Victor, claimed his client was photographed attempting to protect an elderly man, instead of inciting violence.

He admits his client “used bad judgement that day” by bringing pepper spray — more specifically “bear spray”— into the Capitol, but reiterated he was only intending to use it for protection.

Victor claimed his client is not a member of the Oath Keeprs and has no affiliation with the paramilitary group that is reported to be under investigation by the DOJ.

But U.S. attorneys told the judge they have evidence suggesting Victor is a lifelong member of the organization.

Schaffer was photographed wearing a tactical vest and a baseball cap that read “Oath Keepers Lifetime Member.” The organization describes itself as “patriots” who believe in multiple Deep State theories that have long been disputed.

The DOJ described the organization as a “militia of former law enforcement and military personnel” that has often “urged President Trump to declare Martial Law in order to prevent the Congress from certifying the Electoral College Results.”

According to documents published by the DOJ, Schaffer identified himself to members of the media and confirmed he was from Indiana.

“We’re not going to merge into some globalist, communist system, it will not happen. There will be a lot of bloodshed if it comes down to that, trust me,” he said, according to the documents published by the DOJ. “Nobody wants this, but they’re pushing us to a point where we have no choice.”

Last July, Schaffer spoke with the YouTube channel MetalSucks in a now unlisted video voicing his distrust in government and denying the coronavirus’s true infection and hospitalization rates and death toll.

Before the insurrection, Schaffer did not have a prior conviction on his record. Victor said his client did not suffer from mental health problems, alcohol or drug abuse.

Schaffer, who can appeal Magistrate Judge Zia Faruqui’s decision, will appear in a status hearing next month.

In explaining his decision, Faruqui insisted, Schaffer’s actions are reinforced by “long held beliefs.” These were not isolated events, the judge said.