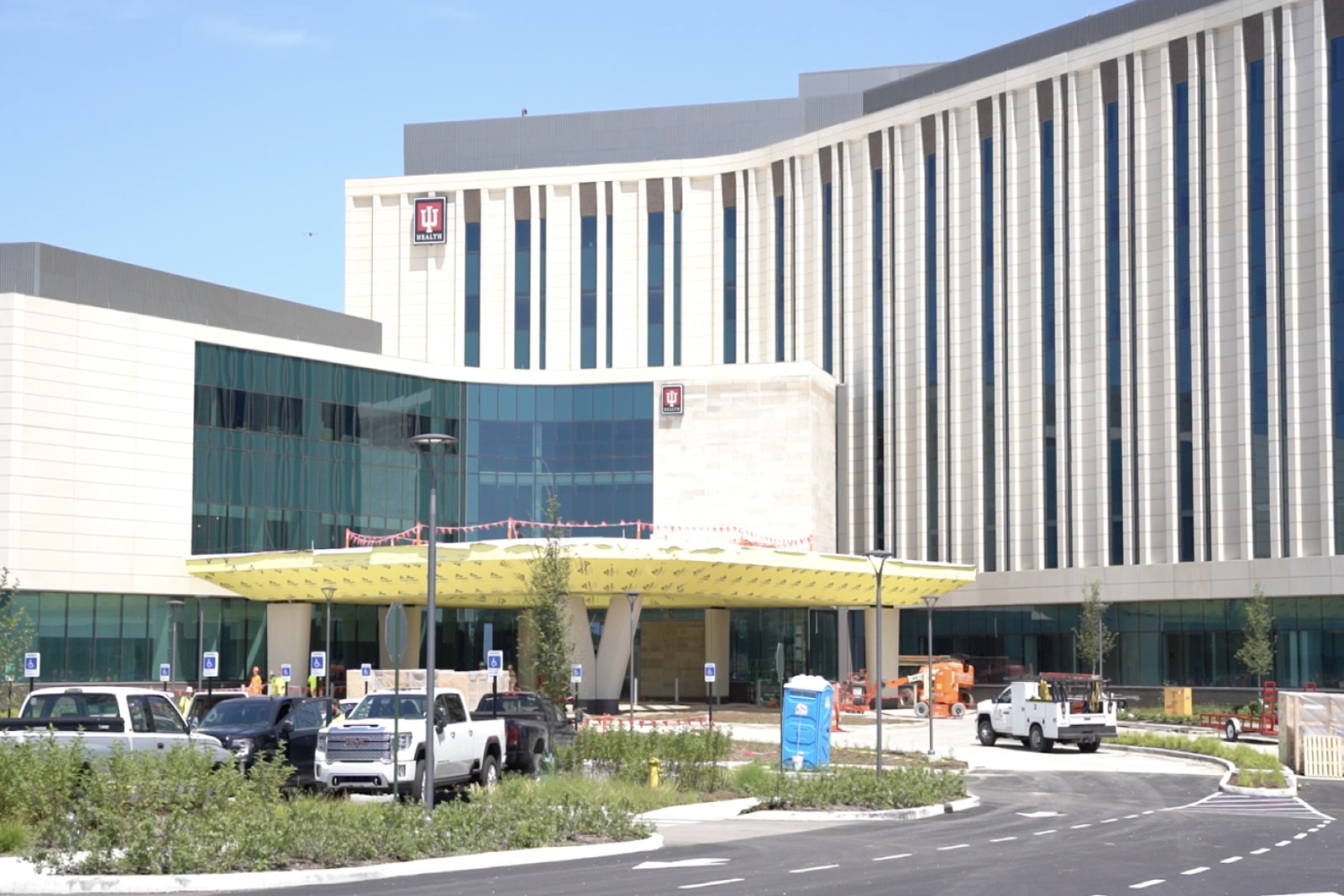 IU Health Bloomington at the Regional Academic Health Center on the campus of Indiana University is slated to open later this year. (Alex Paul/WFIU News)

IU Health’s new regional academic health center is sure to bring changes for those who work, live and travel on Bloomington’s east side.

The bright, new limestone facility with its expansive curved entrance opens later this year off Bloomington’s bypass. At 622,000 square feet, the regional health center has 80,000 more square feet than the downtown hospital.

Dr. Dan Handel is the IU Health South Central Region Chief Medical Officer. He says not only has the total bed count gone up, but the facility is designed for IU Health to expand existing programs – such as its Cancer Center and behavioral health services.

“You know… we have a much more robust inpatient psychiatric facility that we're growing upon the capacity we currently have now. So, you know, the entire fifth floor is dedicated to behavioral health,” he said.

“Every year we do a workforce study, and we look at the data to see, okay, what are the needs of our community, not only in terms of number of providers, but which specialties so we continue to recruit and grow that,” he said. “And I think having a new hospital is actually it's a great enticement for us to recruit more providers to the area.”

The programs housed in Indiana University’s new Health Sciences building could also impact east side housing, traffic and even demographics over time. Sitting adjacent to the new hospital, the Health Sciences building houses IU’s medical, nursing, psychology and social work programs, as well the Department of Speech, Language and Hearing Sciences. IU officials hope to add dentistry in the future.

Dr. David Daleke, Vice Provost for Graduate Education and Health Sciences, says each program will expand in some capacity over the next few years. The nursing program could see the largest expansion. He says a plan to double undergraduate nursing enrollment is already underway.

“The nursing program is going to be expanding from its cohort of 60 to a total of 120,” he said.

Handel says IU Health will partner with the university to establish two or three medical residencies in primary care. People from all over the country will apply to the program, he says, and they’ll want to stay.

“There's definitely an interest when we talk to our medical students about staying in Bloomington. So this is another opportunity for them to continue their practice, and then hopefully stay with us after residency and practice in the community.”

Five years ago, Curry bought property on the corner of Pete Ellis Drive and Longview Avenue. He scooped it up right after IU Health confirmed it was building its new regional health campus on the east side. He’d been eyeballing the opportunity for a while, because options for developing on the east side are limited.

“There's just nowhere to go. I mean, there are no open parcels of land. So I felt like this has to be a good investment,” he said.

He received approvals last fall for a planned unit development with apartments, about 14,000 square feet of commercial space, and a parking garage. As for the commercial element, he envisions medical or financial office space.

“Or IU Health. I mean, we've just started to market it,” he said.

Curry’s development could be a glimpse into the eastside’s future, given an existing housing crunch and a shortage of east side medical office space. Combine the new health center with the university’s plans for the corridor, and Curry predicts the east side will continue to change for a very long time to come.

“And change is hard. Change is going to require bigger, taller structures, more parking, more cars. And because you just can't go across the street and buy ten acres and put a nice little building over there without causing problems, you're going to have to go in and get a piece of property rezoned, and maybe raze a few buildings. You're going to have to just kind of stretch the limits.”