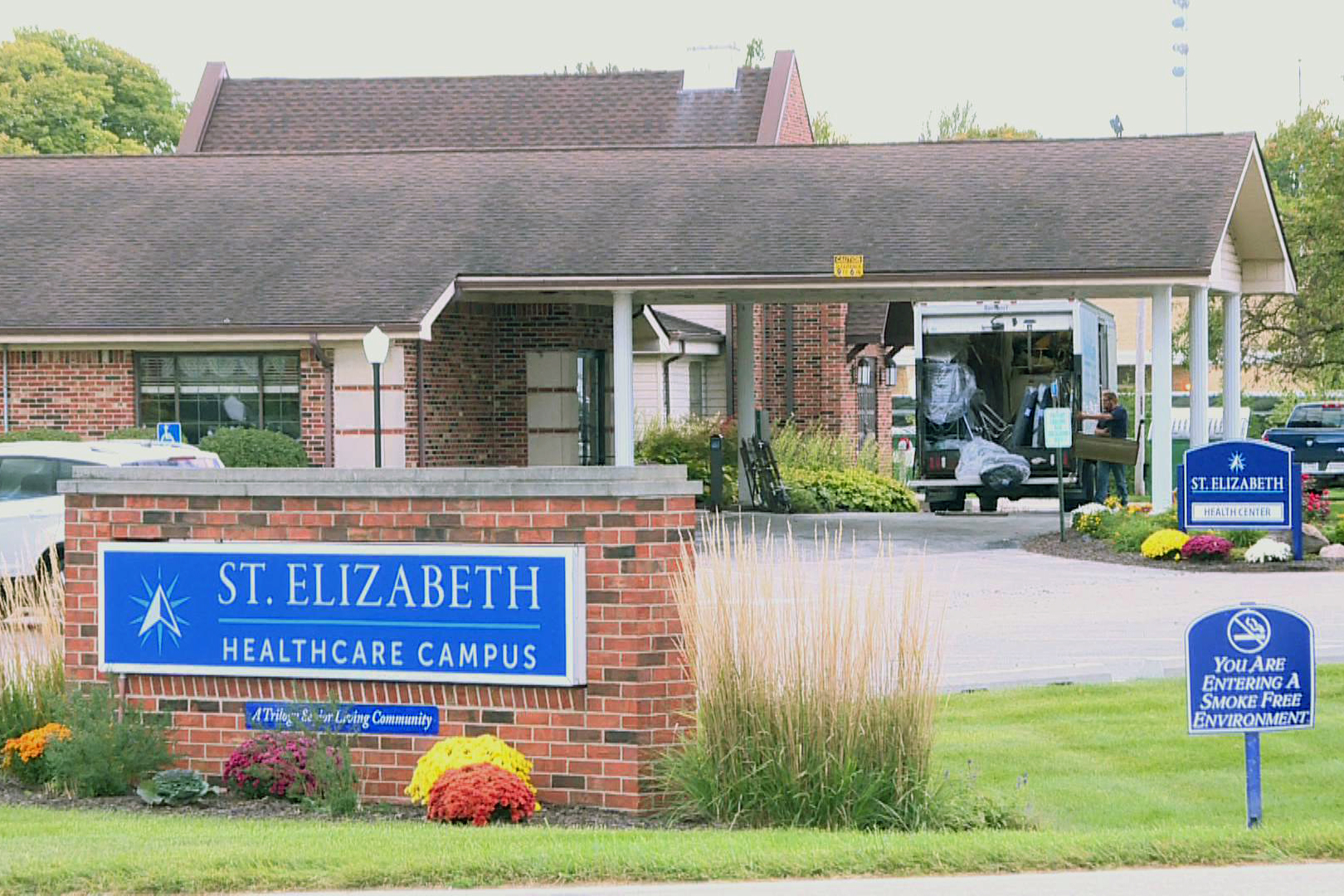 Trilogy Health Services did not comment on what happened at its Delphi facility. The company cited privacy concerns. (Brock E.W. Turner, WFIU/WTIU News)

For months, thousands of residents in Indiana nursing homes have been isolated. What began as an early-pandemic protection is now eroding their quality of life.

Despite forming an essential and compassionate caregiver program, the Indiana State Department of Health (ISDH) has deferred much of the oversight and management to facilities themselves. Caregivers are caught in the middle and often left powerless.

Vickie Ayres fights back tears as she remembers her mother, Carolyn, who died just last month after a stay in at St. Elizabeth Healthcare Campus in Delphi.

“She loved to travel and eat out and we would take her out several times a week for outings, and when they locked down that was over,” Ayres said. “They wouldn’t even take them out in the facility bus for a drive around or anything. They took everybody and made their worlds that were small, even smaller.”

Allegations Of Mistreatment At An Indiana Nursing Home

St. Elizabeth Healthcare Campus is owned by one of the Midwest’s largest nursing home operators—Trilogy Health Services. When the pandemic began, Ayres says she considered moving her mother out of the facility and to her home, but she was concerned because there wasn’t an accessible bathroom in her farmhouse.

“I didn’t feel like I was set-up properly in my home to be able to have her here,” Ayres admits. “Six months later, knowing what I know, do I wish I had done that? Yes.”

The place where her mom’s bathroom would have been is still unfinished down the hall from her home office. Contractors have been hard to find, she said.

But Ayres believes caregivers shouldn’t have to make that decision—seeing a loved one or leaving them in a place where extra care can be provided.

The situation quickly spiraled. Ayres says staff at St. Elizabeth Healthcare kept her mom isolated in the facility’s COVID-19 wing for weeks—even after she tested negative.

The company—which is one of the largest nursing home operators in the Midwest declined an interview, and refused comment on the facility’s polices in a provided statement.

“Out of respect for the privacy of our residents and their families, we cannot comment on specific details regarding those in our care,” the company wrote.

According to Ayres, it gets worse, she says her mother and other residents went months without receiving proper showers.  She alleges staff restricted visits—even window visits—from her and other caregivers because “they were too dangerous.”

Ayres says she made the decision to move her mom due to the lack of visitation and her declining health.  She would eventually test positive for COVID-19 leading Ayres believe her initial test was a false positive.

The facility’s owner, Trilogy, wrote it will, “continue to work closely with the ISDH, pursue transparency, provide quality care, and put our residents and their families first, just as we always have.”

Carolyn died on August 26 at the age of 81 due to complications of COVID-19.

Guidence Shifts Power To Facilities Instead Of Caregivers

Andrea Smothers is the ombudsman who serves the area, she says nursing homes across Indiana have been forced to interpret vague guidance and that’s leading to significant visitation variation.

“The guidance that they were given pretty much from our perspective as advocates gave a lot of control to those facilities on how or when, or under what circumstances they would allow visitors,” she said.

That visitation guidance from the Indiana State Department of Health (ISDH) was updated to reflect the latest federal recommendations from the Centers for Medicare & Medicaid Services.  It outlines clearer procedures, but sets a high bar for indoor visitation.

For example, a facility is not recommended to resume visitation unless it has had no new cases for 14 days, its county positivity rate remains low, and residents are notified.

Yet, multiple ombudsmen—who serve as advocates for caregivers and their loved ones—say facilities are doing a poor job communicating these visitation policies and updating caregivers on changes.

Those changes and that lack of communication, I think build the distrust by the caregivers,” she said.

However, a state program designed to increase access to facilities is plagued with problems of its own.

Instead of creating uniform visitation protocols, Indiana’s essential and compassionate caregiver program has produced a patchwork of guidance that experts and caregivers say is poorly communicated, while also giving facilities too much discretion.

The department declined an interview, but provided a statement saying, in part, “Recognizing the importance of this [essential caregiver] role, we have encouraged this in facilities.”

Experts say the difference between “encouraging” and requiring is important. Under the current language, ISDH effectively lacks enforcement or oversight.

“Applications are not required to be submitted to the state Department of Health, so we do not have any data on the number of applications accepted or denied,” the department wrote.

During the state’s weekly COVID-19 briefing, Dr. Lindsay Weaver, Chief Medical Officer for ISDH, said caregivers can still file a complaint with ISDH if they feel a facility has wrongly denied their application or isn’t meeting visitation requirements.

“Our infection preventionists work very closely with the long-term care associations we have biweekly phone calls work with them to really work through what does visitation look like and how we can do it safety,” she said the department works with facilities and trade groups to determine what is feasible.

“Of course, we always take family complaints or concerns and we’ll follow up on those,” Weaver said.

However, that process also favors facilities according Smothers.

“When I filed complaints on behalf of residents and their families who couldn’t get in, as an essential family caregiver, I got a very length, nice email from the surveyor saying, well, it’s up the facility, and there’s nothing more I can do.”

Families with loved ones in long-term care facilities know their time is limited. They’re tired how it is, and many don’t have the resources or time to file complaints with facilities or the state.

Nearly everyone interviewed, agrees tightening visitation at the beginning of the pandemic was the right decision, but few see the rationality six months later.

“What we’re doing is wrong,” Ayres said. “And it’s wrong to an extent that I don’t think many people are aware of.”

“How do we justify that?  There may have been no on-on-one interaction that wasn’t supervised,” she said.

Mary Swinford, the Deputy Director of the state’s long-term care ombudsman program understands the initial hesitancy, but believes now is the time to find a solution.

“We do owe it to our seniors, our residents to continue to advocate for them to have these visits. These visits are vital to residents.”

Ayres has a hard time understanding why more people aren’t outraged a policy made out of necessity months ago remains in effect when rapid testing capacity is available for athletes, college students, and other populations.

“It is abuse,” she said. “At this point it is abuse because it is long-term. It isn’t the short-term health crisis solution to the pandemic.”

And that’s why she and others say they’re going to keep advocating for visitation.

“[Facilities and the state] could make it work, and it’s not that they can’t,” she said. “It’s that they won’t.  And that’s wrong,” Ayres said with tears in her eyes. “Even though my journey is over with my mom, I have to speak for those people that are left.”