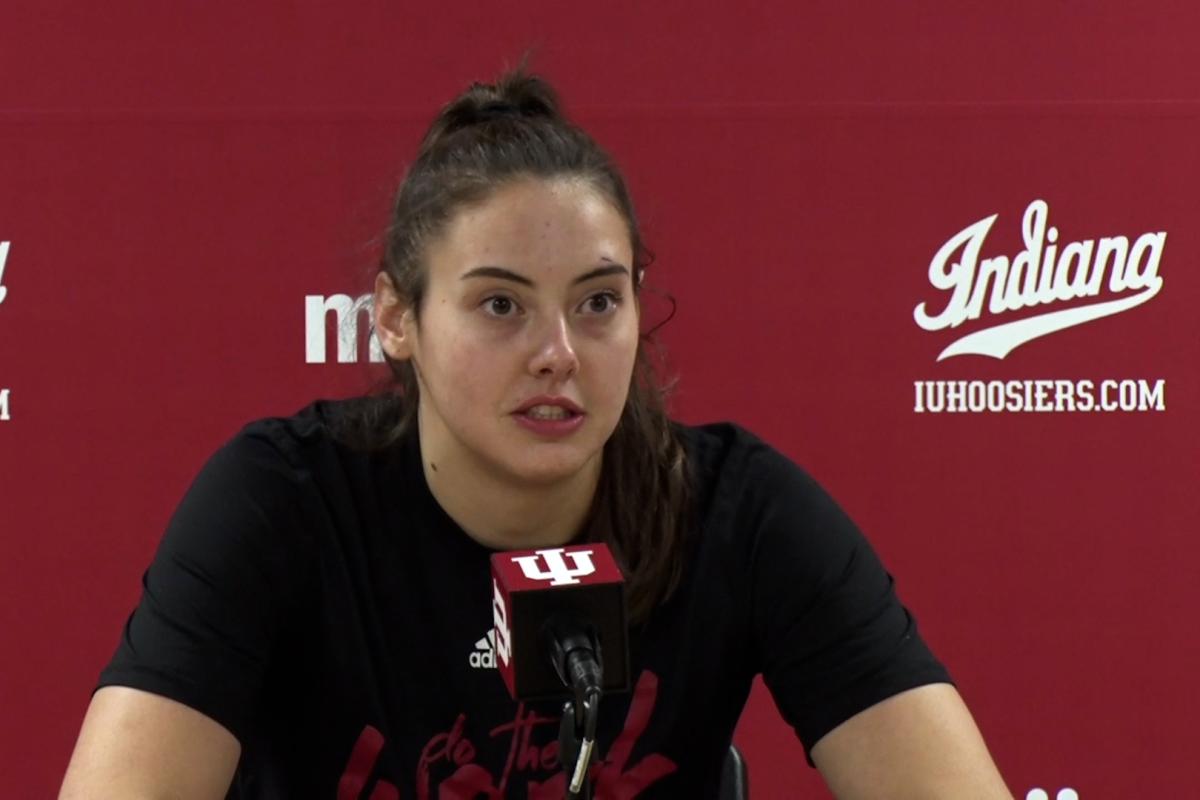 The Indiana women’s basketball team reached the Elite 8 for the first time in school history last season and were ranked as high as No. 9 in the nation.

They went 16-2 in the Big Ten, finishing one game behind Maryland in the league race.

And all while playing a shortened schedule in front of empty arenas across the country because of the COVID-19 pandemic.

“Last year was fun, and it was great, but none of that really matters going into this year,” junior forward Mackenzie Holmes said. “And we’re starting with a kind of blank slate. And we have even bigger goals in mind and bigger aspirations.”

But the Hoosiers won’t be starting from scratch. They return all five starters, led by Holmes, who was an honorable mention All-America last season after averaging 17.8 points and 7.6 rebounds a game last season, both team highs.

Holmes said she’s been working on her outside shot over the summer, including the 3-pointer, which she went 0-for-6 on last season.

“Continuing to work on that every day,” she said. “But also getting stronger, getting a little quicker laterally. I definitely want to be better defensively this year off the ball on rotations.”

She and senior guard Grace Berger, who averaged 15.4 points, 6.8 rebounds and 4.9 assists per game last season, were both named preseason All-Big Ten.

Berger also played this summer for Team USA, which won the gold medal at the AmeriCup.

Berger said her time with the national team was invaluable.

“I was for three weeks straight, practicing twice a day, like three, four hours a day against the best players in the country,” Berger said. “So just seeing kind of where I stand with them and seeing what I need to work on.

“And then just confidence, you know? I saw I was able to play with the best players in the country.”

The other returning starters are guards Ali Patberg and Nicole Cardano-Hillary and forward Aleksa Gulbe.

Patberg is actually in her seventh season of college basketball. She started at Notre Dame and missed her freshman season with a knee injury, then had to sit out a season when she transferred to Indiana. Because of the pandemic last season, the NCAA granted an extra year of eligibility to anyone who wanted to use it.

Patberg jumped at the chance to come back.

“When I had the choice to come back, and I knew everyone else was going to come back, it was a no-brainer,” Patberg said. “I love a year at IU; I love the people.”

Patberg averaged 14 points a game last season and was second on the team in assists.

Indiana head coach Teri Moren said having all five starters back is a luxury but also a challenge.

“We still have to hold those five starters to a standard and still bring out and get the best out of them every day by still coaching them hard,” she said. “The veterans, you do them a disservice if you’re not holding them the way we’ve always held them, and that’s to a really high standard.”

The program has been on the rise under Moren, who has a 148-80 record in seven seasons.

Since taking over in 2014, Indiana has appeared in the NCAA tournament three times. It would have been four, but the 2019 NCAA Tournament was postponed by the pandemic. The Hoosiers also won the WNIT championship in 2018 and have been ranked in the top 25 a program-record 38 straight weeks.

Indiana enters the season ranked No. 8, its highest ranking ever. The Hoosiers will be tested early with games against No. 3 Stanford, No. 5 N.C. State and No. 13 Kentucky. Defending Big Ten champion Maryland is ranked No. 4.

“We do that with the intention of always preparing our kids for Big Ten play,” Moren said. “And I think if we didn’t do that, our kids would be awfully disappointed. They love the competition, they love the challenge.”

The Hoosiers are hoping the tough schedule pays off in the long run.

“It really gives us a chance to, one, play against that type of competition and, two, prepare ourselves for what the Big Ten is going to offer, because there’s a lot of great teams in the Big Ten,” Holmes said.

That includes Maryland, which handed Indiana one of its two conference losses last season. Iowa, Michigan and Ohio State are also ranked in the top 25.

“Just like everybody talks about Indiana having their returners back, well, so does Maryland, and so does a lot of other teams in the Big Ten,” Moren said. “So, it’s going to once again be an incredible, exciting Big Ten season.”

And while the team reached new heights last season, the Hoosiers know there’s more to accomplish.

The Hoosiers open the season Friday night with an exhibition game against the University of Indianapolis. The regular season tips off Wednesday at Butler.