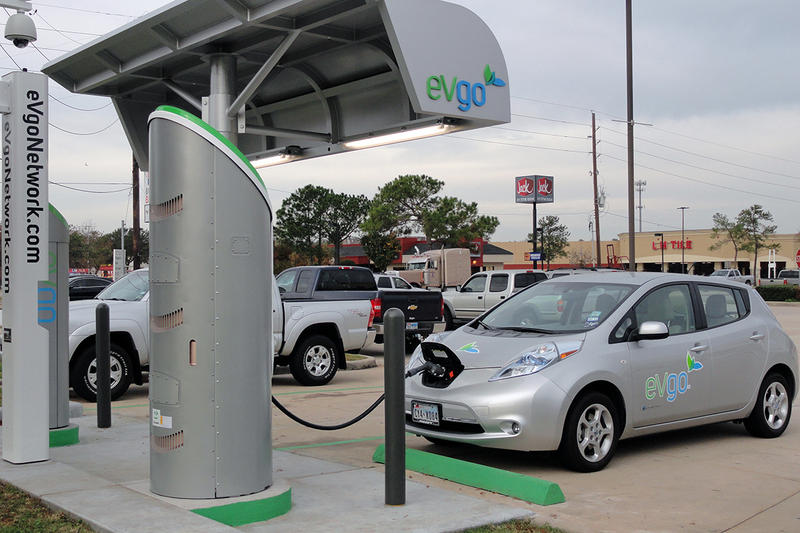 A Nissan LEAF charging at a station in Houston, Texas, that has both DC fast chargers and lower-level chargers. (eVgo Network/Wikimedia Commons)

Indiana will award a group of eight electric utilities more than $5.5 million to set up charging stations for electric vehicles across the state. The money comes from the settlement with Volkswagen over its Clean Air Act violations.

The Indiana Utility Group will build 61 DC fast charging stations — which can charge electric cars in as little as 20 minutes. There are about 40 high-powered public charging stations in the state — more than half of them are in Indianapolis.

Shawn Seals with the Indiana Department of Environmental Management said utilities have a vested interest in the success of these charging stations.

“Because they’re providing the power to the stations as well," he said.

The Indiana utilities in the group will also provide partial matching dollars for the program. Though it’s unclear if they’ll try to recover those funds from their customers. The members of the Indiana Utility Group still have to decide where the stations will be located.

“We’re open to working with IDEM on the best locations and figuring out what’s the best solution for the state as a whole. One of the strengths of our application was filling every gap in the state,” said Jordan Wallpe with Duke Energy.

Most of the stations should be complete by the end of 2023.