How Many Downtown Apartments Are Too Many? That's An Ongoing Question 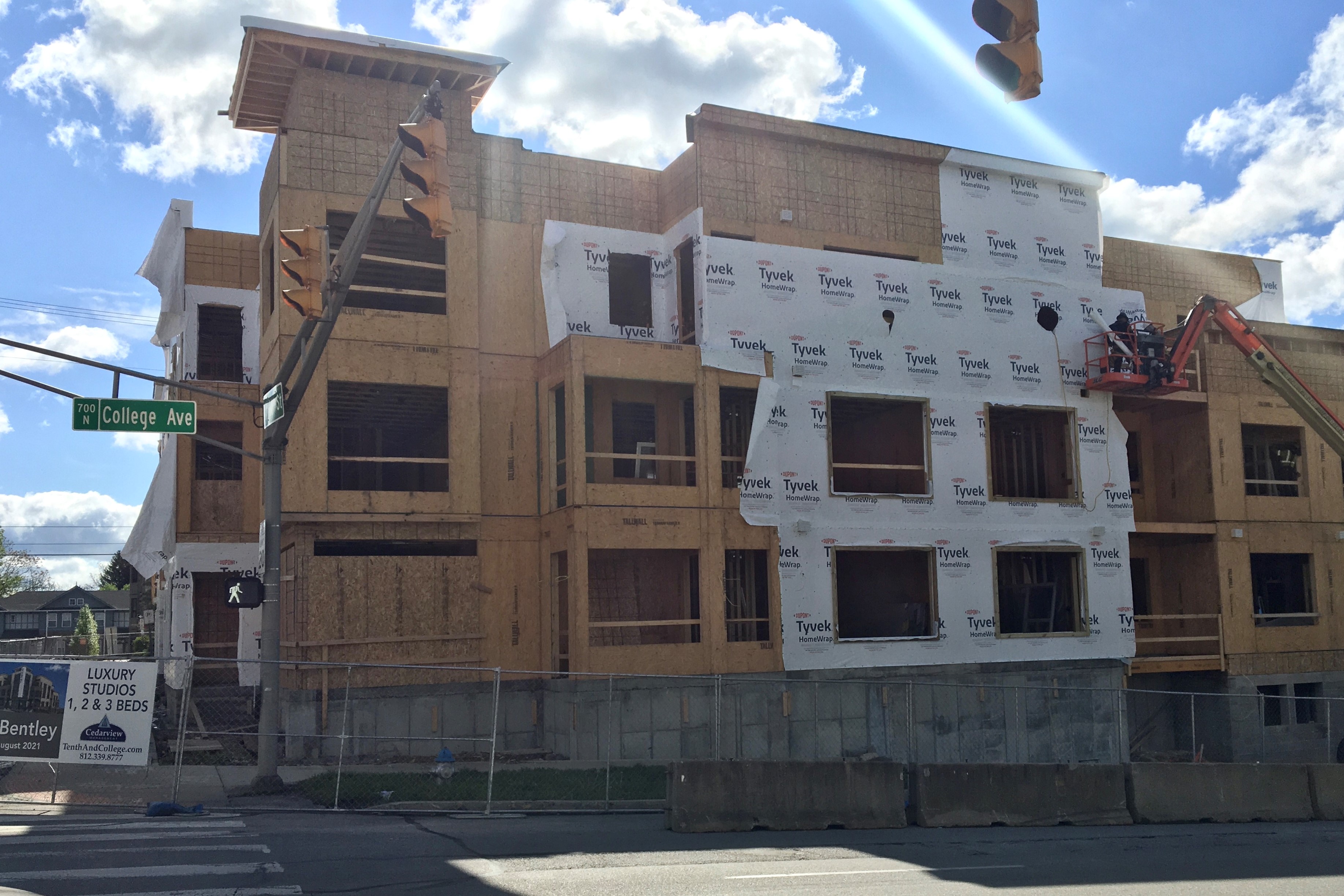 The Bentley apartment complex is under construction on the corner of 11th Street and College Avenue. (Pat Beane/WTIU)

On the corner of 11th Street and College Avenue in Bloomington, construction workers race to complete another downtown apartment complex.

The three-story structure, called the Bentley, will have 34 total units and is scheduled to open in August, just in time for the start of the fall semester at Indiana University.

It’s just one of the latest apartment buildings that have sprung up downtown the past two decades.

And that has listeners asking, at what point does the downtown become over-saturated with apartment complexes?

“There’s a lot of people that like Bloomington just the way it is, and I do, too,” said Chris Cockerham, a member of the Bloomington Plan Commission and a commercial real estate broker and consultant. “But we’re an evolving community, and we’re going to continue to change, and I like that part.”

Cockerham said the growing number of apartments downtown are just keeping up with demand. As the size of the university population increases — it’s above 43,000 now — the need for housing increases.

“In Bloomington, we’re at about a 98% occupancy rate,” Cockerham said. “So we get national real estate developers that look at our occupancy rate, they see our wonderful university, it’s very predictable on the students coming in. So, it’s a pretty easy investment.”

While new apartment complexes have seemingly sprung up on every other street corner downtown, Cockerham says it was what the city envisioned two decades ago in its 2002 Growth Policies Plan.

Mark Figg is a long-time developer in Bloomington and is on the Monroe County Apartment Association Board.

He says the push for housing in the heart of the city helped revitalize a downtown that had begun to deteriorate in the 1970s and ’80s, with abandoned buildings falling into disrepair.

“We would be downtown when I was in high school, it was just us redneck kids,” Figg said. “Now, there’s just people. I feel like it’s nicer and safer.

“I’ve heard student ghetto term, and I just hate that. I think it’s made the downtown.”

Along with bringing residents to the downtown area, the apartment complexes were able to fill vacant lots and replace dilapidated buildings.

READ MORE: Wingate By Wyndham Hotel On North Walnut Being Converted Into Apartments

Smallwood set the tone for downtown apartment boom when it opened in 2004. It sits where ST Semicon once stood.

The Semicon building had sat deserted for more than a decade and was a contaminated Superfund site. It was demolished in 2003 to make room for Smallwood, an eight-story, 220-plus apartment complex that became the poster boy for the anti-downtown student housing crowd.

“And, don't forget,” he said, “when Smallwood happened, that was a $43 million project at the time. I mean, that added so much to the tax base, the city was able to capture that money and spend it on improvements in the downtown.”

Still, Cockerham says Smallwood would have a hard time getting built today.

“I doubt we’d ever approve another Smallwood,” he said. “But they took a chance early on in the development of our downtown, and they cleaned up a site that really needed cleaned up.”

That has been the case with most of the apartment complexes downtown.

MORE ON DOWNTOWN BLOOMINGTON INFRASTRUCTURE: Bloomington To Eliminate Right Turns On Red At Most Downtown Intersections

For example, Station 11 was built on the site of a closed gas station. Figg opened the apartment building in 2011.

“Those underutilized properties have another life,” Figg said. “We bought the gas station on 11th and College that was Bruce's Marathon. Great place. He was a great operator, but he was ready for his next chapter. And we were able to put a 97-bed, 33-unit place there.”

But in the city’s 2018 comprehensive plan, which replaced the 2002 Growth Policies Plan, the tide has shifted to a desire for more affordable housing and senior-oriented complexes in the mix downtown.

“One of the things we stated in the new one is we don’t want as much student housing; we want more diverse housing in the downtown,” Cockerham said.

Whether the city gets that or not is to be seen.

Cockerham says there has always been some pushback against student housing in the city. He tells of a developer in the 1960s who would come to his office to talk shop.

“I said what were the challenges? What did people say back in 1968?” Cockerham said. “He said, ‘People would come to me and say, “Bloomington doesn’t need any more student housing.” He said, ‘We don’t need that.’ And he got so much pushback. It’s the same argument we’re hearing today.”

And it’s likely an argument that may never be solved.