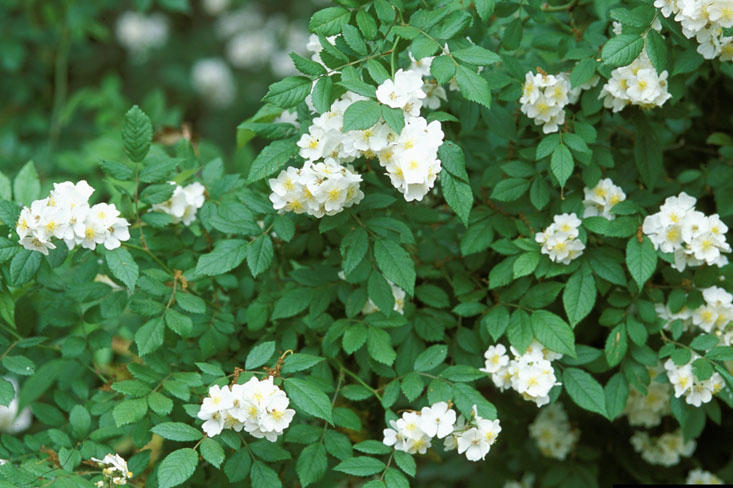 This is what an invasive multiflora rose looks like in the springtime. (James H. Miller, USDA Forest Service/Bugwood.org)

A new group needs your help to keep invasive plants like Bell’s honeysuckle and Oriental bittersweet out of the Great Lakes region.

Clair Ryan is the coordinator of the new collaborative Woody Invasives of the Great Lakes. She said, like many invasive species, woody invasives push out native plants and damage wildlife habitats. They also tend to have deep roots and make a lot of seeds — so they’re especially hard to control.

Ryan said woody invasive plants can cause even more problems near bodies of water like the Great Lakes.

“Under a really dense canopy of buckthorn or honeysuckle you can expect to find nothing, just bare dirt. So that can cause erosion problems," Ryan said.

That can harm animals like frogs and salamanders that need both the land and the water to live.

As more than 95 percent of the land in Indiana is privately owned, Ryan said invasive species managers need landowners to be able to recognize these plants.

“And hopefully feel empowered to either just start the work themselves using some of the information on our website, but also to work with their local invasive species groups," she said.

Ryan said landowners can either hire someone to control invasive woody plants on their property or do it themselves — maybe with the help of local volunteers, like a Boy Scout troop.

"It does require a commitment and follow up for often a number of years to get really big infestations under control, but it's worth it," she said. "It's worth it in the end when you start to see the native plant diversity coming back to your land and then followed by wildlife diversity."

The collaborative has put together a website to help people control woody invasive plants in the Great Lakes region. It includes a list of native species you can plant instead of things like the Callery pear tree — which despite a statewide ban on the invasive species trade, is still legal to sell in Indiana.

Ryan said landowners should also report any invasive plant species they see that isn't usually in Indiana to their local CISMA (Cooperative Invasive Species Management Area) or to the Woody Invasives of the Great Lakes Collaborative.