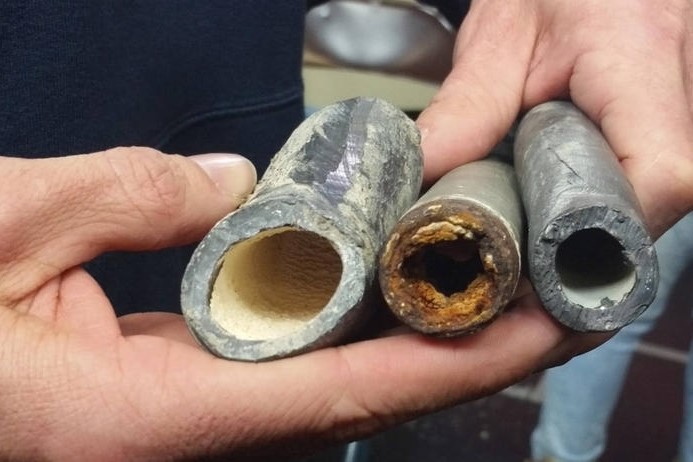 An EPA civil engineer shows how corrosion control treatments can affect lead pipes. The one on the left was treated, the middle one was not, and the one on the right is a new pipe (Lauren Chapman)

There’s been a big push to reduce lead in drinking water around the country. But few of those efforts have been focused on private wells — where about a quarter of all Hoosiers get their water.

A new study shows kids who drink well water are more likely to get exposed to lead. Children in North Carolina whose homes had private wells were about 25 percent more likely to have high levels of lead in their blood than those who had city water.

Jackie MacDonald Gibson co-authored the study and chairs the Department of Environmental and Occupational Health at Indiana University.

“Most people who get their water from a private well don't test their water quality on a regular basis — and so they may be drinking contaminated water and not even be aware of it,” she said.

Gibson said some well owners may not be able to afford a test or upgrades to their water system. Like public water systems, the study said a lot of lead contamination comes from lead pipes and a lack of corrosion control.

Garry Holland is the education chair for the Indianapolis branch of the NAACP — which has been advocating for state laws to address lead in drinking water. He said gentrification has pushed more African American families outside the Indianapolis city limits.

“When you look at the outskirts in any city, one has to begin the planning or research to see what industrial complexes were out in those areas that may have dumped contamination into the soil,” Holland said.

Kids with lead poisoning can have trouble learning, behavioral issues, and poor kidney function. Holland said no matter if the water comes from a private well or a city water system — Indiana needs to do a better job to protect its children.

Among other things, the study said there should be more federal funding to help well owners and laws to ensure all new wells are lead free.

Well owners in Indiana may be eligible for financial assistance through the Great Lakes Community Action Partnership or the U.S. Department of Agriculture.