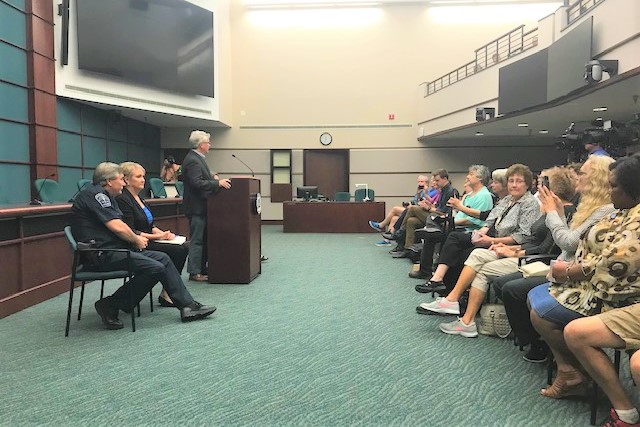 In the wake of weeks of conflict and tension over the presence of a vendor with alleged ties to a white supremacist group, Bloomington Mayor John Hamilton announced Monday a two-week suspension of the Community Farmers’ Market.

Wednesday morning, Hamilton spoke about the controversy and took public comments and questions.

The first of what Hamilton says are two major challenges to the city’s ability to provide public safety. He says both are out of his [local] control.

Hamilton says it’s dramatically more difficult to protect public safety when firearms are involved. He says both national and state gun laws are “disgraceful” and dangerous.

“Most directly here, they work to hamstring us locally from virtually any attempts to manage the presence of firearms at our farmers’ market,” he says.

Hamilton has spoken out publicly in opposition of Indiana’s liberal gun laws, writing in a 2016 New York Times op-ed, “despite what a vast majority of Bloomington wants, we can’t ban a handgun from a public pool or a machine gun from a parade float.”

There were rumors that counter-protesters who came to the last market were armed, provoking some to ask why an unarmed, peaceful protester was arrested. Hamilton says that market rules currently allow guns but restrict protesting to specific areas.

Hamilton says “a toxic stew of bigotry and hatred” is being brewed by many in the United States, including by President Donald Trump.

He says messages of “bigotry and racism” are coming from the White House. Hamilton referenced Trump’s comments insulting four minority U.S. congresswomen and the City of Baltimore.

Hamilton says this toxic national atmosphere is part of what eggs on groups and individuals who might become violent in Bloomington.

Hamilton says public safety officials reported threats to him on Monday, which prompted the two-week suspension.

He says the threats came from “specific individuals with connections to past white nationalist violence.”

According to Hamilton, the “doctrine of white supremacy” is present in Bloomington, playing a pervasive role both in history and the town today.

Last weekend, members of the Indiana chapter of Three Percenters, a group that advocates against “government overreach and tyranny” were in attendance at the market.

And at City Hall, an audience member asked about the reported presence of ANTIFA, a left-wing anti-fascist protest group, at the market. Hamilton sidestepped the question.

Neither Hamilton nor Bloomington Police Chief Michael Diekhoff would comment on the nature or extent of the threats.

Hamilton says he swears, as mayor, to uphold the Constitution in his work.

“The First Amendment certainly allows a mayor to speak out forcefully against white supremacy,” he says.

He also says that the First Amendment doesn’t allow for city government to restrict individual speech or thought, saying, “We don’t police your thoughts.”

Hamilton says he shares the “spirit and goals” of Cara Caddoo, an IU professor who was arrested last weekend for protesting outside of designated zones at the market. But he noted that market-goers must follow the rules at apply to protesting, and that action was required because Caddoo broke those rules.

“That even-handed approach to enforcing market rules regarding protest is constitutionally required, and resulted in the actions last Saturday,” he says.

Hamilton did not reveal any concrete steps the city is taking to defuse the situation.

The role of the city, he says, is to protect public safety at the market and manage and run the market.

“In the immediate two weeks, we will be improving programming, increasing staff and volunteer presence and enhancing safety procedures at the market,” he says.

He says the market’s recovery will depend on how the community responds.

Hamilton suggested that community members should meet and manifest support for the market and asked for public input, saying, “We welcome ideas about how best to do our work as we gather in coming days.”