Farmers' Market Reopens, Business As Usual For Some 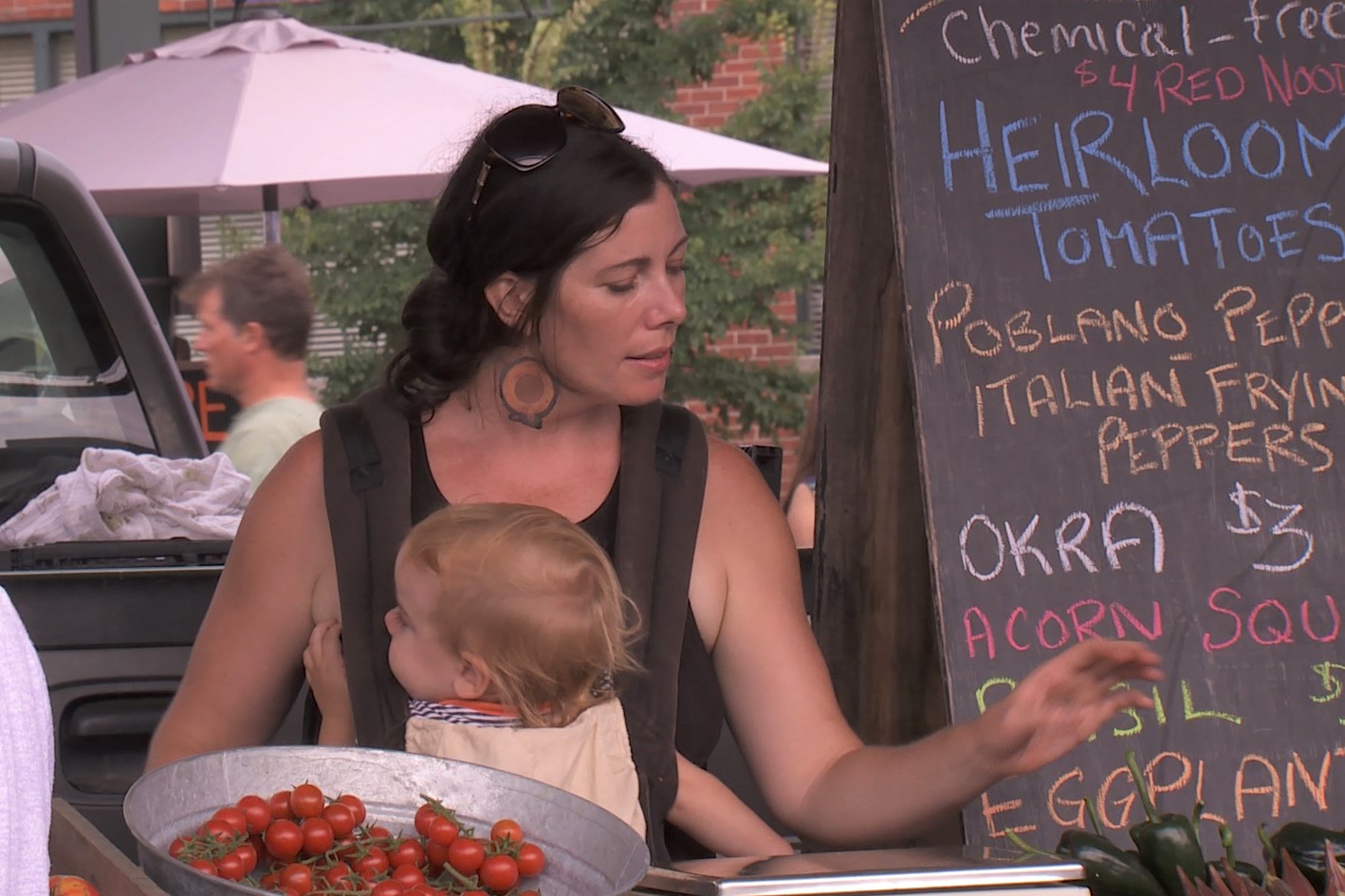 Thousands of people showed up at Showers Plaza in Bloomington for the reopening of the Community Farmers’ Market – including Schooner Creek Farm, the vendor with alleged ties to white supremacist group Identity Evropa.

Aside from a peaceful demonstration early in the day, there were no disruptions at the market’s first showing after a two-week suspension imposed by the city due to concern for public safety.

Schooner Creek Farm owners Sarah Dye and Doug Mackey were set up in their usual spot, C-8, selling bunches of basil, cherry tomatoes on the vine and green peppers.

Dye did not directly deny allegations that she’s affiliated with Identity Evropa.

“There is no such organization as Identity Evropa,” she says.

Technically, this is true. Identity Evropa dissolved in March after threads from chat server Discord were leaked and published by nonprofit media organization Unicorn Riot.

IE's leader announced the formation of American Identity Movement several days after the threads were leaked at IE's annual conference. AIM, as its known, has been classified as a white supremacist group by the Anti-Defamation League and as a hate group by the Southern Poverty Law Center.

Dye confirmed that she does consider herself an ‘identitarian.’

“Identity politics exist today,” she says. “It’s a way of viewing the world that emphasizes the importance of identity.”

Some say, however, that identitarianism is a movement of racism and exclusion.

Dye says the city offered to move Schooner Creek’s spot from C-8 to E-1, which is situated on the outskirts of the market. She says the city said it was for safety reasons.

Dye declined because the spot is “exposed on all sides and within 30 feet of the protesters.”

As promised by the city, there was increased police presence, as well as surveillance cameras mounted above the vendor spots.

Dye says she was grateful for the extra police presence.

The city also implemented ‘market ambassadors,’ volunteers who stood throughout the market to guide patrons and answer questions.

Bloomington resident and market ambassador Ellen Rodkey says she volunteered for the job because she wanted to support local businesses and farmers.

“I’m just standing at the Seventh Street entrance, welcoming people, to be a smiling face, hand out stickers,” she says.

Mayor John Hamilton spoke with market attendees outside a booth that advertised “Mayor at the Market.” He says he’s glad so many people came out to reopen the market.

Hamilton says he hasn’t yet received feedback about the additional security measures the market has implemented.

“We’re glad thousands of people came out today to reopen and reclaim the Community Farmers’ Market,” he says. “I’ve often said this is a community market, and the community is embracing it today.”

“Some of them have different views, some of them want us to do certain things, we’re trying to do the right thing for the whole community,” he says. “We certainly wish all vendors success – they’re the way the market works, is because vendors are here.”

Linda Lewis owns Rasta Pops with her husband, Iuri Santos. They usually set up on the B-Line Trail just outside the market.

This weekend, Lewis was in the Bloomingfoods parking lot with her popsicle cart. She worked with Stacy Decker from Stanford Farm to organize the alternative market.

“We don’t feel like the market is a safe place for our family,” she says.

Lewis says the promise of increased policing at the downtown did not make her feel any safer.

Dale and Julie Bolejack made the hour-long drive from Shelbyville, Ind. to attend the alternative market. Julie says this is the third weekend in a row they’ve been to the Bloomingfoods location.

She says they make a point of attending the alternative markets because they’re appalled and frightened by the situation at the downtown market.

“This isn’t a world that we want to live in,” she says. “We fought world wars to fight off some of this hate, and the fact that under the First Amendment – freedom of speech – hate is allowed, and people are being threatened, is just something that we don’t understand. So we’re here to support people who are fighting for people of color and for the rights of all of us, to live safely.”

Julie Bolejack says they’ve been driving down to attend the downtown market for years.

“We’re just really upset about what is happening and the fact that the market doesn’t want to take care of the situation in a way that ensures that everybody feels welcome,” she says.

There were five people patrolling the perimeter of the alternative market space with earpieces. One man, who wished to remain anonymous, said they were volunteer security.