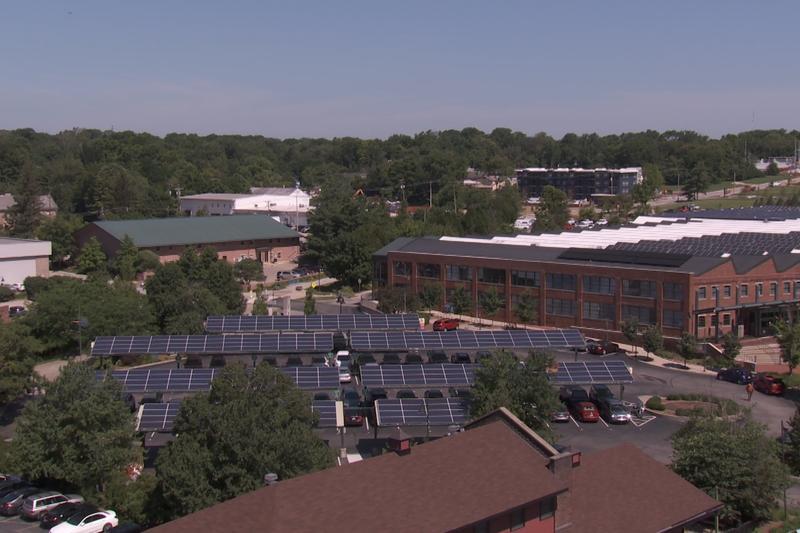 City officials from Bloomington, Carmel, and West Lafayette — and other Indiana lawmakers — sent a letter to Duke Energy this week urging the utility to make a faster transition to renewable energy. Some cities worry Duke will keep them from reaching their goals to cut greenhouse gas emissions.

Among other things, the coalition wants Duke Energy to retire its Gibson coal plant by 2030, stop burning coal at its Edwardsport plant and replace that energy through renewables and energy efficiency.

Carmel Mayor Jim Brainard said the city of Carmel has set a goal for all its city operations to be carbon neutral in about 30 years — but it likely can't achieve that goal without Duke's help.

“One of the big challenges we have is how we heat and cool our buildings and light our buildings — and that all comes from electricity," he said.

Brainard said Carmel has already spent millions of dollars to upgrade its stormwater system to handle the heavy downpours its been getting in recent years due to climate change. This summer, as in many parts of the state, wildfires in Canada and the western U.S. made the air quality in Carmel unsafe for certain activities outside.

Brainard said the city could likely see even more impacts if countries around the globe are unable to reduce their greenhouse gas emissions quickly.

The lawmakers who signed the letter also want the company to reduce the energy burden for its lower-income customers and clean up toxic coal ash in Indiana as thoroughly as it did in North Carolina.

"It's almost corporate criminality at this point that they are not lined and protected as has been done by Duke in other places," said Isabel Piedmont-Smith, 5th District Bloomington city council member.

Though Piedmont-Smith said Bloomington doesn't have coal ash ponds, many Hoosiers around the state are vulnerable to having their groundwater contaminated by coal ash.

Duke Energy is in the process of putting together its long-term plan, which will project what it expects its energy mix will be in the next 20 years. Angeline Protogere is a spokesperson for Duke Energy Indiana. She said in the company's last long-term plan, Duke moved up the retirment dates of its coal units by an average of nine years.

READ MORE: How To Know What Your Utility Is Up To And Get Involved

Protogere said the company is committed to making the energy it provides as clean as possible as quickly as it can.

“We have to though constantly balance that priority with ensuring that our electric rates are affordable and that our service is reliable," Protogere said.

According to the U.S. Energy Information Administration, renewable energy sources — particularly solar — are now cost competitive with natural gas. Both of those sources are cheaper than coal.

Duke Energy expects to complete its long-term plan in November. You can learn more about that process and how to participate through Duke Energy's website and the Citizens Action Coalition website.