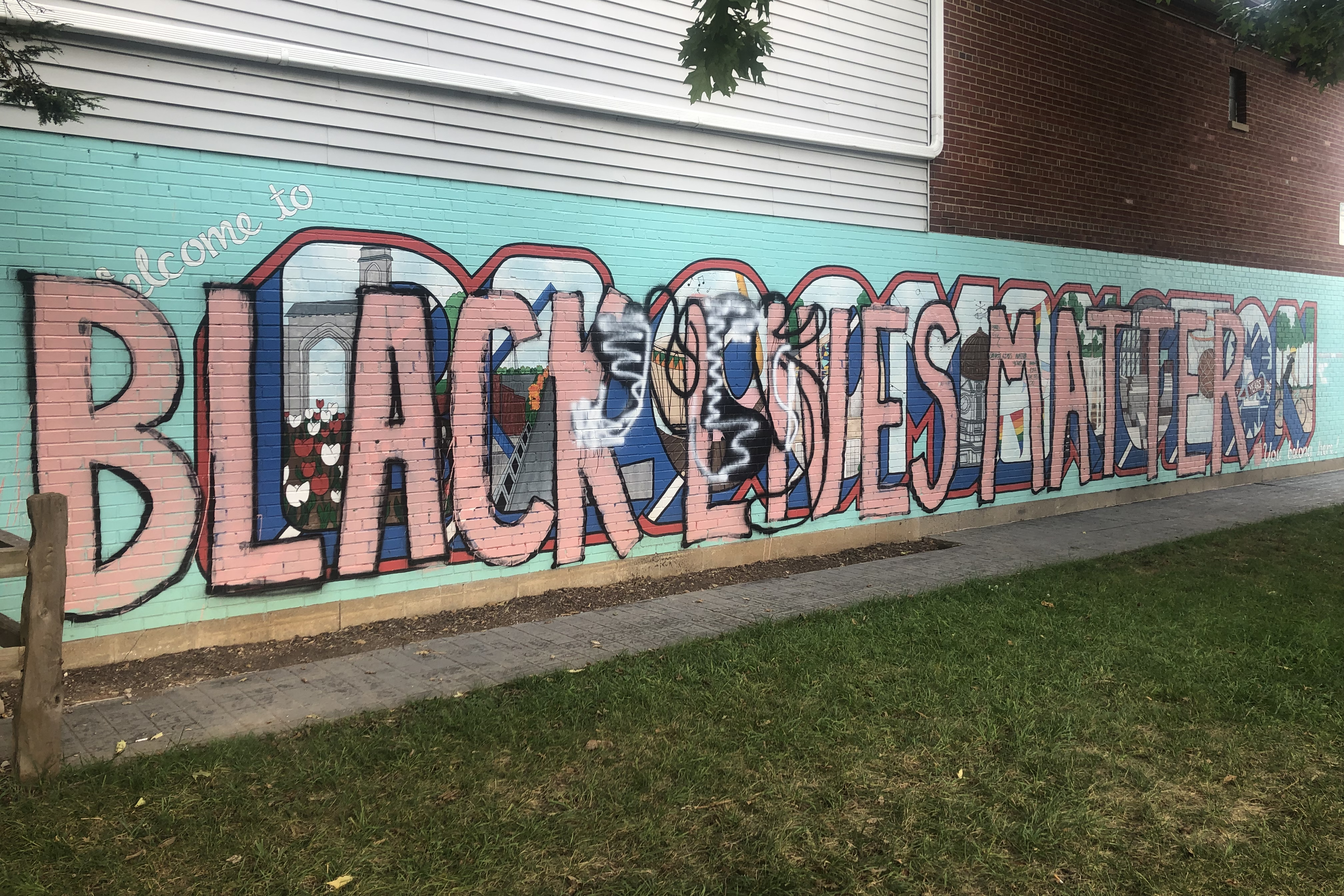 Public murals are often the result of a public-private partnership. City governments work with business owners to commission a space for artists to design.

Since 1996, the Bicycle Garage’s wall facing Peoples Park hosted rotating murals. The Rhino’s Youth Center led the partnership until it closed in 2019.  Its final commission was local artist Eva Allen, who unveiled her “You Belong Here” mural in fall 2017. Her contract lasted through August 2020.

However, the mural was painted over on June 19, 2020, or Juneteenth, to say “Black Lives Matter” in pink letters.

“The secondary painting over top of her mural came at a time when that three-year period was almost up,” said City of Bloomington communications director Yael Ksander.  “So, the idea was that there was going to be another commission made.”

Ksander said the city has intentionally left the mural untouched for more than one year.

She said the words “Black Lives Matter” were painted in Peoples Park without proper approval.  At the time, Bloomington police investigated the painting as an act of vandalism.

However, BLM murals on Elm Street and Sixth Street, installed in October 2020 and May 2021, were legally approved. Local Black artists Raheem Elmore and Christina Elem designed the murals.

The Banneker Community Center Advisory Council led the two projects, which the Bloomington City Council, Board of Art Commission, and Board of Public Works approved.

“Putting the words “Black Lives Matter” on the street is one part of a multifaceted effort on part of the city to bring greater racial equity to our system, to our policies, to our programs, to our- everything we do,” Ksander said.

Sean Starowitz, assistant director for the arts in Bloomington, said the Board of Art Commission is looking to honor the park’s complicated history.

In 1968, a Black-owned business, the Black Market, was firebombed by several members of the Ku Klux Klan. The store never rebuilt, and the space was dedicated as a park later in 1976. It has often been used as a site for public gatherings and protests.

He said public art has changed in the last year. After the summer of 2020, it has become inherently political.

“Public art has shifted into this- I mean it’s always been political,” Starowitz said. “ But the role of public art has kind of cemented itself in politics in a different way.”

The Board of Art Commission volunteered to maintain the Elm Street mural for two years, at which time the road is scheduled to be repaved.  Additionally, the board is working to eliminate barriers that prevent first-time artist, artists of color, or female artists from applying or being selected to design public art.

“We are trying to consistently represent a wide variety of voices because, traditionally, the arts and culture sector has been- is predominately white,”he said.

Starowitz praised the Rhino’s Youth Center program in Peoples Park because the art rotated every few years, allowing new perspectives over time. He said public art should not be considered permanent.

“I think we have to think about lifespan of public art,” he said. “I think it is really important to think about how communities evolve and change, and how new community members- teens, youth, next generation folks- can be a part of that process.”

The murals in Peoples Park and on Sixth Street and Elm Street are not the only ones in town.

The mural will be officially dedicated Thursday evening.