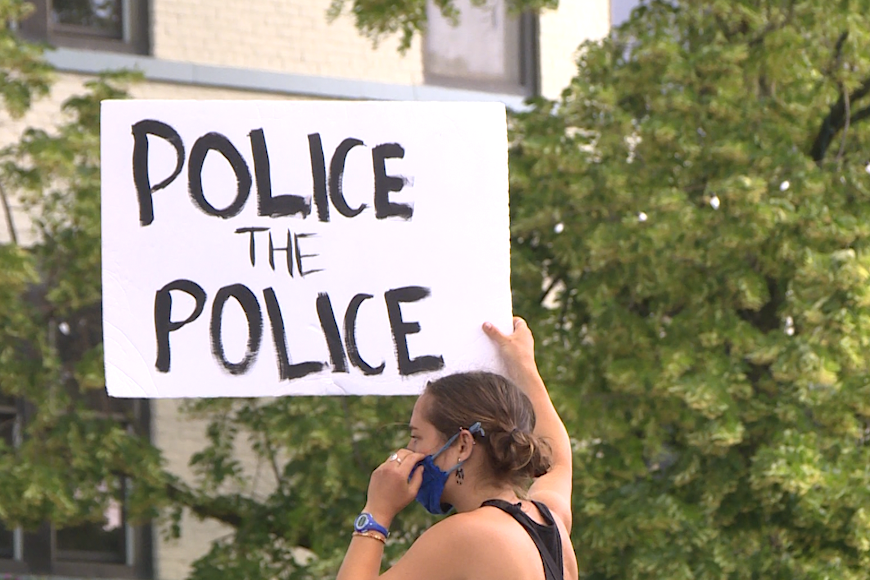 A protester holding a sign outside the Monroe County Courthouse on June 9, 2020 (Zach Herndon, WFIU/WTIU News)

The Bloomington City Council’s public safety committee held its first of what it says will be many community conversations about policing Thursday night.

One of the most discussed topics during the meeting was about arming police officers.

Council member Isabel Piedmont-Smith says police in America have become too weaponized over the years.

“It’s confrontational rather than collaborative. The root problems that lead to crime and conflict between people cannot be solved by armed police," Piedmont-Smith says.

In 2018, the city purchased a Lenco Bearcat armored vehicle for $250,000. It was a controversial purchase then, and now several community members and organizations are again questioning why the BPD needs to own such powerful weapon.

“I think the council and BPD should respect the demand from Black Lives Matter Bloomington to sell the Bearcat and use those funds specifically for community resources," community member Bridget Dunklau says.

Sims says this was just the first of several conversations city council will have on how to improve the way local law enforcement operates.

“We heard you. We will deliberate with that. I look forward to having more community conversations, maybe in a situation where we can have robust conversations and back and forth," Sims says.

The next opportunity for the public to discuss these issues will be during the Monroe County Council’s virtual town hall on Tuesday, June 30th at 6 p.m.