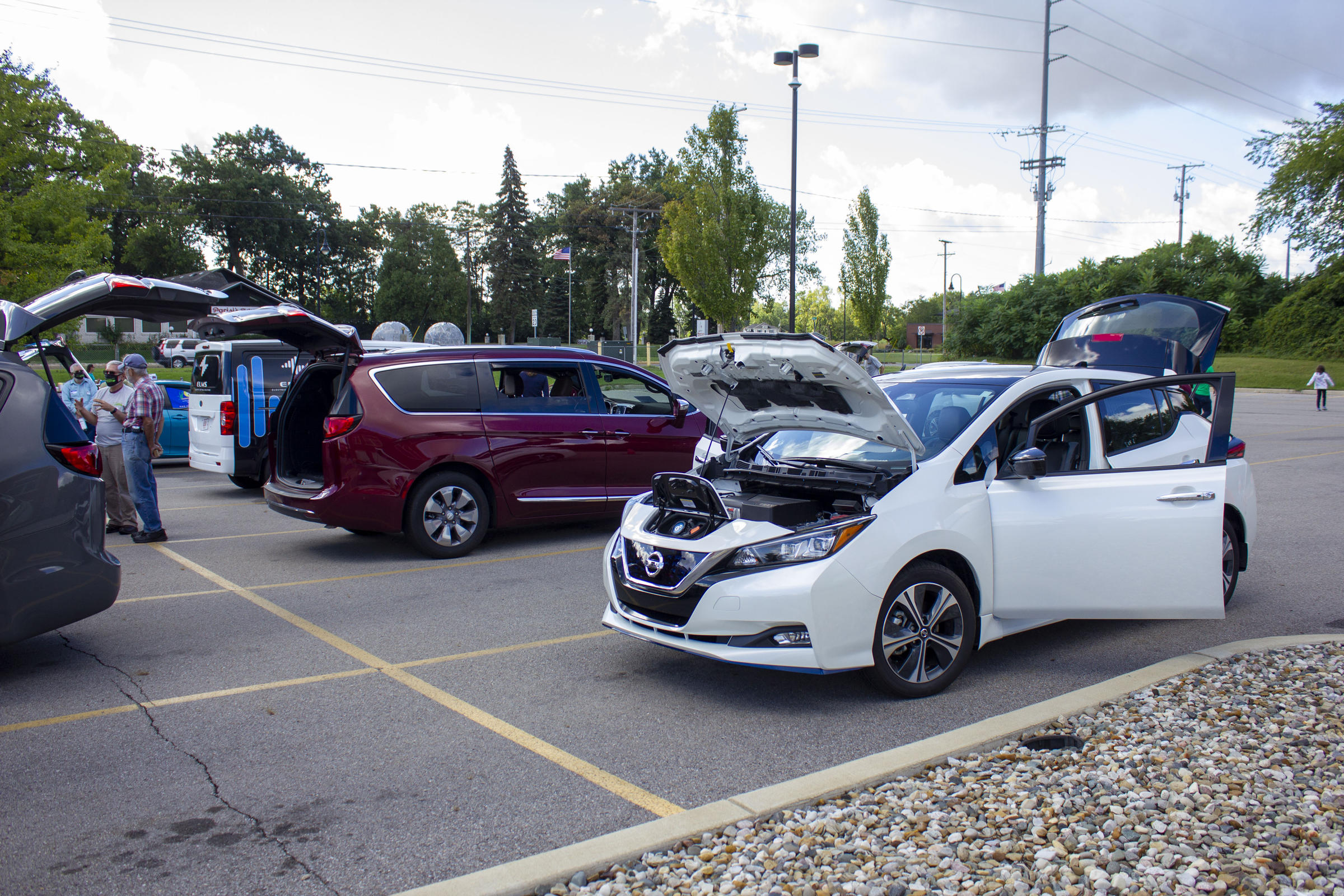 It’s a cool and sunny Saturday morning, and about a dozen people are milling about in a parking lot on the edge of Notre Dame’s campus. The main attraction? A dozen electric vehicles, complete with their owners.

Some of them were higher-end options, like the new Mustang Mach-E — an all-electric crossover SUV that starts at $42,895 and gets around 210 miles of range.

But there were also some more affordable cars, like the all-electric Nissan Leaf which starts at $27,400 and also gets 210 miles of range.

Owner Warren Rees purchased the car in July 2020, and said he loves it. He had a 240-volt outlet installed in his garage — think what an electric clothes dryer uses — and the car gets to a full charge overnight.

His only complaint? He wishes the range was a bit bigger.

“It really comes down to when you're taking a longer trip, do you mind taking a little bit longer? Maybe you’re going to add an hour to a 300-mile trip, or something like that,” Rees said. “When I get to the end of a 300-mile trip, I actually feel better taking breaks like this forces me to take.”

He retired last year, and said he became interested in purchasing an electric vehicle after seeing cheaper options like the Leaf as opposed to a Tesla.

There were also some plug-in hybrids, like the Chrysler Pacifica minivan owned by Scott Seifer.

With the hybrid engine, he gets about 500 miles of range — perfect for trips to Florida. But when he’s just going around town, he only uses the electric motor, which has about 32 miles of range.

“Except for those long trips that I’ve taken between here and Florida, I’ve never used any gas,” Seifer said. “So why not get one of these, and it has a plug, and you can run electric if you want?”

Depending on your income, you can get up to $7,500 off your taxes if you purchase a new electric or plug-in hybrid vehicle, except ones made by Tesla or General Motors — those companies have already sold more than 200,000 EVs, so they no longer have a tax credit.

There’s also a federal tax credit that covers 30 percent of the cost, up to $1000, of installing an EV charger in your house. That typically runs from $500 to $3,000. And many power companies also offer incentives — Indiana Michigan Power will give you $500, for example.

The University of Notre Dame hosted the expo as part of National Drive Electric Week, and it was held in conjunction with area environmental non-profit South Shore Clean Cities and the Michiana Area Council of Governments, or MACOG.

Lauri Keagle, the communications director for South Shore Clean Cities, said that thanks to the wider range of models and those tax credits, EVs are no longer high-end luxury vehicles for rich people.

“I can tell you the folks who are most interested — not just because of curiosity, but because they really want to get behind the wheel — are seniors,” Keagle said. “They like the convenience; they don’t have as much range anxiety — maybe staying closer to home.”

And Keagle said more federal incentives could be on the way if the infrastructure bills currently being debated in Congress are passed.

“There really is an EV out there for everybody, it’s just a matter of finding one that meets your needs,” Keagle said.

But are EVs practical for renters, or people who own apartments or houses without garages? Charging a fully-electric vehicle on a regular wall outlet is not practical — it can take an entire day — so you really need that 240-volt system.

Leah Thrill, MACOG’s senior environmental planner, said that’s the most challenging barrier to EV adoption and called it a public policy issue. She owns a Chevrolet Bolt EV but lives in South Bend’s Near Northwest Neighborhood in a house with no garage — only street parking.

Instead, she uses the community shared use charger the neighborhood association had installed in their parking lot. And she said it gets a lot of use — there are times when she’s pulled up to charge but has to wait for someone else to finish.

Keagle said there’s a new federal program from the Department of Energy — Vehicle Charging Innovations for Multi-Unit Dwellings — that could help, and to contact South Shore Clean Cities for more information.

The University of Notre Dame is a financial supporter of WVPE.